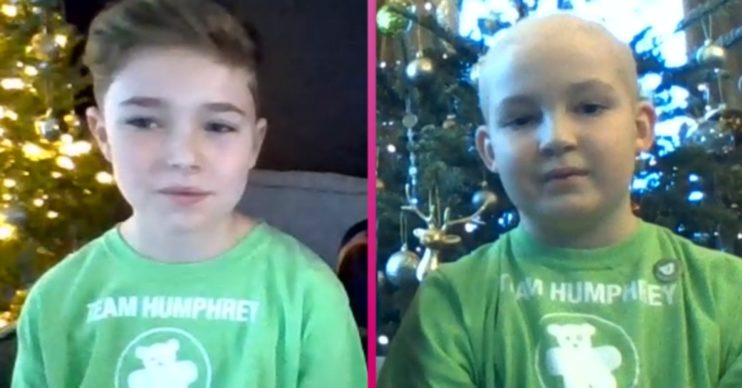 ITV viewers were in tears

On This Morning, Eamonn and Ruth chatted with a young boy doing something incredible for his poorly friend this Christmas.

Who were Eamonn and Ruth’s guests on today’s This Morning?

Hughie, aged 10, was diagnosed with Leukemia and his best friend, Freddie, wanted to do something special for him.

He decided to try to raise £1,000 for Royal Manchester Children’s Hospital, which is handling Hughie’s treatment, by running 100km by Christmas.

Read more: Eamonn and Ruth: This Morning viewers overjoyed to have couple back

However, the lad has already managed to smash that target by raising an whopping £29k.

Praising his friend, Hughie said: “He was amazing, really, because he’s such an influence to other people, he’s just so amazing and I couldn’t thank him any more.”

Hughie’s health going forward is the biggest Christmas present we could have.

Eamonn asked: “What would be the best Christmas present for you and your family?”

Hughie’s dad replied: “I think, Hughie’s health going forward is the biggest Christmas present we could have, the [staff] at the hospital are just amazing and they’re working towards that.

“Not just Hughie – they’re treating some of the bravest kids in the world at the hospital.”

What did This Morning viewers say about Freddie and Hughie?

Another tweeted: “The boy running 100km for his best friend #ThisMorning. What’s that in my eye?”

A third said, with emotive faces: “#thismorning look at these two lads man, they’re both amazing.”

A fourth wrote: “Can’t be the only one absolutely sobbing at these two boys on #ThisMorning?”

I'm not crying, you're crying #ThisMorning

Elsewhere on This Morning, Eamonn and Ruth had the Speakmans on to help viewers with their festive phobias.

One person admitted being scared of Father Christmas and the life change therapists revealed that finding Santa terrifying isn’t as uncommon as you might think.

They also chatted with a woman who said had a real phobia of vegetables.