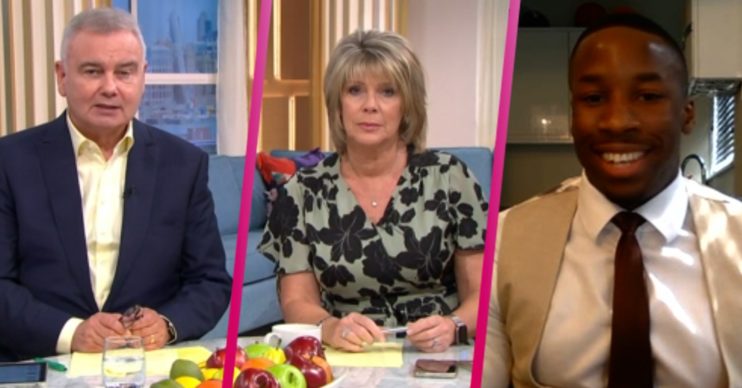 He was very handsome

This Morning welcomed Dr Emeka Okorocha to their discussion about Kanye West on Thursday (July 23).

But the serious topic of Kanye’s bipolar disorder was somewhat overshadowed for viewers by Dr Emeka’s presence, with viewers a bit hot under the collar.

Dr Emeka has been on This Morning before, earlier this month, so it’s certainly not the first time he had fans swooning.

What did This Morning fans say about Dr Emeka?

How do I get an appointment with Dr Emeka 😍😝 #ThisMorning pic.twitter.com/xbGHuHTEpE

Yes please doctor!!! Get that shirt off!! #ThisMorning

Wow who is this Doctor 🤩 #ThisMorning

I can’t concentrate. The body on this fella 😍 #ThisMorning

What did Dr Emeka say on This Morning?

Dr Emeka was on the show alongside psychologist Emma Kenny to discuss bipolar disorder.

It comes after disturbing videos of Kanye West emerged at his first presidential rally.

His wife Kim Kardashian has subsequently spoken out about his bipolar disorder and requested “compassion and empathy” for her family to get through it.

Discussing the medical side of the disorder, Dr Emeka said: “Bipolar is a chronic mental health disorder.

“It’s characterised by a change in the mood so you have highs, manic episodes, and you have lows, depressive episodes.

“The difference between the mood changes in you and me and somebody with bipolar is they can last from several weeks to months and often they don’t have the insight to know they’re in a manic episode or they’re in a depressive episode.

“It’s important for people around them to see where they’re acting a little bit differently and they’re being a little bit erratic or depressed so they can seek help as soon as possible.”

He went on to explain the signs: “The signs vary between different people and depends on what episode you’re in. If you’re in a depressive episode you can have signs similar to depression. Low mood, difficulty engaging, difficulty enjoying activities.

“However, if you’re in a manic episode you can show signs of grandiosity, erratic behaviour, promiscuity and doing things you normally wouldn’t do.”

Eamonn asked if the condition was hereditary. Dr Emeka said: “If somebody in the family has bipolar, it does increase your chance of having bipolar disorder.”

What did Emma Kenny add?

Emma also had advice for those supporting people with bipolar.

“Acknowledge you’re going to feel frustrated and your patience is going to be tested and that’s okay.

“Remember the person is not causing this, they’re not trying to create this. This is happening to them, so reassure them.”

She continued: “Be on their side, be on their team. Find out about bipolar, so you’re equipped with tactics. When you go and see a healthcare professional with them, help them feel that you are with them and you are on their side.”