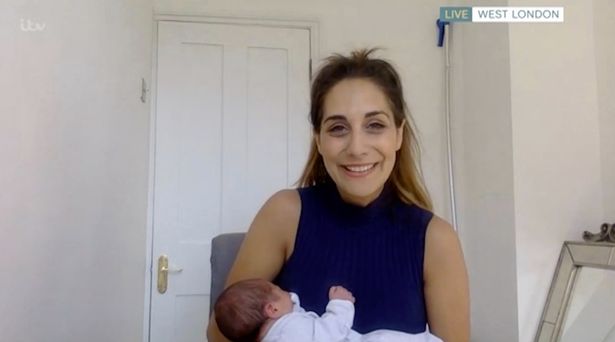 This Morning doctor Sara Kayat gives birth in the bath

The doctor introduced her newborn baby boy on the show

This Morning doctor Sara Kayat introduced her newborn baby son on today’s show, revealing that she gave birth to him in the bath.

The tot was 10 days early, taking Sara and her husband by surprise.

Read more: This Morning viewers in tears as elderly woman cries over losing her beloved cat

Sara revealed baby Harris Walker arrived so quickly that he made his entrance to the world before the midwife had even arrived.

My poor husband had to catch the baby as he ejected out.

“He was 10 days early and because he is my first, everyone was expecting him to be at least a week or so later so he took us by surprise,” Sara said.

“I was at home. I’d always wanted a water birth but hadn’t quite expected it to be in my bath, with no midwife present.

“My poor husband had to catch the baby as he ejected out.”

Read more: Phillip Schofield and Holly Willoughby in hysterics on This Morning as BGT dog Miracle runs riot during interview

Holly and Phil congratulated the new mum, who said she feels an ‘overwhelming love sensation’ that she never knew she had in her.

Sara went on to explain that she didn’t realise she had been in labour for a couple of days, saying she thought she was having ‘muscle aches’.

“He came out at about 9:20, we had to call the ambulance to make sure with the midwife not knowing what time they would get here for,” she said.

So it turns out I was probably in labour for a couple of days, but active labour was only two hours.

What a difference a day makes… . These photos were taken one day apart and my entire world has changed! . Harris Walker born yesterday to the happiest parents alive. . He is just magical, and we are all doing very well ❤️. I can’t stop staring at him!! SQUEE!! My heart is actttually squelching with love!

Sara added: “It was fast, my first contractions were around 3, 4, 5 in the morning.

“It turns out I was probably having them for a couple of days, but I just thought it was muscular, which is ridiculous as I’m a doctor.

“So it turns out I was probably in labour for a couple of days, but active labour was only two hours.”

Dr Kayat divided opinions when she appeared on This Morning on March 17 at 30 weeks pregnant, after the government had advised pregnant women to take social distancing measures due to the coronavirus pandemic.

Some viewers thought it was irresponsible to have a pregnant woman on the show but Sara explained it had been her decision and she had been isolated in her own room, and did her own hair and make-up, before going to the studio.