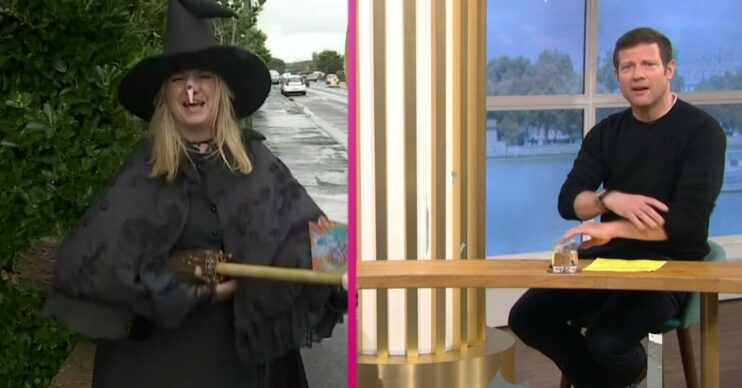 ‘Stop doing that!’ This Morning’s Dermot O’Leary tells off Josie Gibson for ‘weirding him out’

Dermot O’Leary had some words for Josie Gibson on Friday’s (October 29) This Morning.

Josie was decked out as a spooky witch for a Halloween-themed Dosh on Your Doorstep on the ITV show.

The former Big Brother winner even donned a creepy witch nose while she ‘flew’ around on a broomstick.

But the broomstick ride looked a little inappropriate for daytime TV, with Dermot cringing at the footage.

Read more: Dermot and Alison to take over from Holly and Phil on This Morning?

Co-host Alison Hammond said: “She’s flying about on her broomstick all morning, but is Josie about to cast a spell on your front door for a Halloween edition of Dosh on your Doorstep?”

Josie was out and about on location showed her vigorously ‘flying’ around in her witchy get-up.

Dermot told her: “Stop doing that!”

He then added: “She’s weirding me out when she keeps doing that.”

Alison was clearly amused by Dermot’s discomfort at Josie’s antics.

She joked: “Don’t you like it? She’s riding her broomstick!”

Josie Gibson has This Morning fans in hysterics

This Morning fans took to Twitter to comment on Josie’s Halloween makeover and her rather rude broom flight.

“Josie on her broomstick looks a bit rude,” one viewer tweeted.

Another agreed, writing: “I hope that Josie and that broomstick are very happy together!”

A third quipped: “You can keep the broom josie, don’t want it back.”

Josie on her broomstick looks a bit rude. #ThisMorning

You can keep the broom josie, dont want it back #ThisMorning

The This Morning presenting team has been having a fun-filled week with Halloween approaching on Sunday.

Yesterday (October 28) Holly Willoughby sent fans into meltdown with her ‘smoking’ outfit for the spooky holiday.

She transformed into Miss Scarlet from the murder mystery board game, Cluedo.

She shared a spooky video on Instagram before the ITV show aired and fans agreed she looked stunning.

Looking glamorous, Holly wore a red strapless dress which she revealed belongs to her mum.

Her outfit featured matching red heels and a faux fur wrap draped over her shoulders.

Slick red lipstick completed the smouldering look and the transformation into Miss Scarlet.

Fans went wild on Twitter, all agreeing she looked incredible.

One wrote: “Right, I like to have morning TV on in the background while I work, but how am I supposed to concentrate with Holly looking that FINE.”