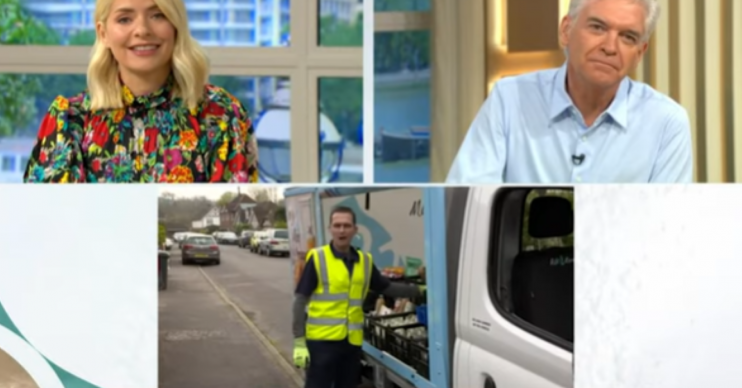 This Morning viewers were given a much-needed pick me up today during a segment with a milkman doing his rounds.

But one of his customers wasn’t all that happy with the service, shouting at him on live television!

Darren Barnes is one of the ‘unsung heroes’ of the coronavirus crisis as he is continuing to deliver daily, and can even bring other groceries, not just milk.

Holly Willoughby and Phillip Schofield linked live to Darren while he was on his rounds in the local area.

Confident Darren was highly entertaining as he gave Holly and Phil a run for their money in the presenting stakes.

Revealing he was working 12 hour shifts to make sure he could deliver to everyone that needed it, Darren was seen going to the front door of one of his customers.

The man came outside and Darren said: “This is the sort of guy that I love, I’ve served him for years, I’m going to make him safe and make sure that we get through this and supply all the things we can.”

As the man retreated into his house, not wanting to be on camera, Darren continued: “He’s a lovely chap, I’ve served him for years and this is what we’re going to do. The vulnerable people, people in society, we’re going to look after them.”

Phil and Holly then moved on to ask how the community have been thanking Darren, but were soon cut short as the milkman left the goods on his customer’s doorstep.

The man could be heard shouting from inside: “You’re delivering stuff that I don’t want!”

Ever the professional, Darren simply said: “Okay, I shall take it back later,” before telling the camera he’d left a few extra bits for the man.

Phil even quipped at the end of the show: “Darren, thank you and don’t worry, we’ll forget you delivered cereal to the man that didn’t want it!”

Darren thankfully took it in good humour and laughed the incident off.

Viewer’s thought it was brilliant

Fans of the show thought the whole thing was hilarious.

Milkman trying to do a nice thing.

The bloke in the house: ‘’You’re delivering stuff that I don’t want’’

Britain in a nutshell #thismorning pic.twitter.com/U846sgxOGL

Darren the @milkandmore guy powered on through even with the customer complaining live on tv lmao! 😂
Good job! #thismorning @thismorning

Did the old guy say that he was delivering things he don’t want !!! #ThisMorning

But so many of them thought Darren really was an unsung hero – he even brought tears to their eyes!

#thismorning Love love love Darren the Milkman in Guildford this morning….❤️❤️ what a hero & a lush guy

Awww… I’m not sure whether isolation is getting to me or what but I’m crying to the milk man on this morning. What a lovely gent 💛💛@thismorning @hollywills @Schofe 😭😭 #thismorning #milkman