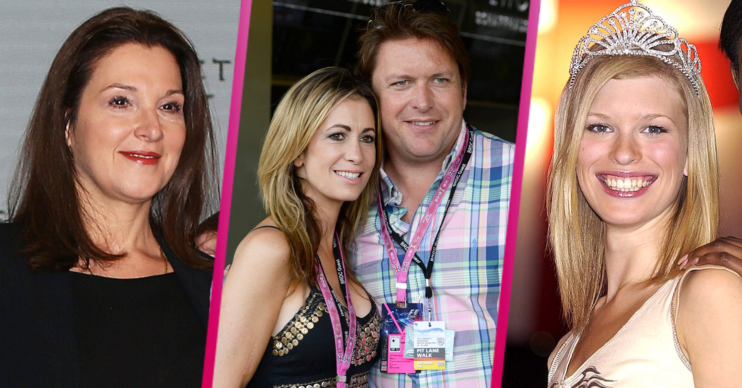 Is celebrity chef James Martin in a relationship? Who is his girlfriend?

The popular butter-loving cook is a hit with the ladies!

This Morning chef James Martin isn’t just hot stuff in the kitchen, his love life is pretty sizzling, too!

James started out on This Morning in 2016 and quickly became famous for his indulgent dishes containing his favourite ingredient – butter!

Butter and cooking aside, James also loves fast cars. So what happened when he found a woman who loved the exact same things?

Well, read on and we’ll tell you – and give you the lowdown on all his previous girlfriends, including Alice Beer!

Is James Martin in a relationship? Who is his girlfriend?

However, the couple tend to shun the limelight, keeping their relationship private.

They don’t have kids, but share a Lhasa Apso called Ralph, and a cocker spaniel named Cooper.

James previously admitted that he wouldn’t ask Louise to marry him because he didn’t want to splurge £60,000 on a big white wedding, claiming  that they are happy as they are.

He told the Sunday People in 2019: “No, it doesn’t interest me in the slightest, mainly because I’ve catered for so many weddings, really.

“I admire people who do it, that’s fine, but I’m quite happy.

James met Louise when he participated in Celebrity Who Wants to Be a Millionaire in 2010.

James Martin on This Morning – with old flame Alice Beer?!

Well this is one we’ve never heard before!

James reportedly once enjoyed a “secret” romance with the show’s Alice Beer – according to another member of the This Morning family Matthew Wright.

Back in the late 1990s, before Alice met husband Paul Pascoe, with whom she shares twin daughters, James and Alice were allegedly romantically lined.

Of course, at the time, neither were signed up to appear on This Morning – nor have they ever commented on or confirmed the reported romance.

However, writing in his column for the Mirror at the time, Matthew insisted that he had the inside scoop from a “spy”.

What did Matthew Wright say about him and Alice?

In 1999, Matthew wrote: “My spies tell me that the celebrity cook has been dating lovely Alice for several months.”

He added that around the same time “Alice said that she had found a man but refused to reveal his name”.

Read more: Where can I find the recipes made on This Morning?

And he quoted an insider as saying: ”Alice and James seem to be really happy. They wanted to keep the relationship hush-hush so the pressure of fame wouldn’t affect their relationship.”

However, fast-forward a few years and Alice met and married her hubby, and James also moved on.

*ED! has contacted reps for Alice and James for comment.

Who else has This Morning chef James Martin dated?

James admits that Bond producer Barbara Broccoli was the “first real love of my life”.

Writing in the Daily Mail in 2008, James said: “Barbara was the first real love of my life. I still think the world of her and always will.

“I would be there for her tomorrow if anything happened. We’ve both moved on but it was one of those special relationships where you never forget the times you had together.”

Read more: James Martin splits his trousers live on air and his reaction is priceless

He turned up at her house to make a meal for her and five friends and he admitted: “We just clicked.”

She was trying to organise a surprise party for Barbara for her birthday and James offered to cook.

What has James said about Barbara?

He added: “Thus began my longest relationship, the most surreal, exciting and unforgettable four-and-a-half years of my life.”

Old romantic James also told her: “Being with you is as easy as breathing.”

He said she was “generous to a fault” and “would give everything to make you happy”.

However, the pair split in 2005, with James going on to be linked to actress Claire Goose.

In 2008, the popular chef spoke about his then girlfriend Sally Kettle, who had just happened to have been named Miss England a few years prior.

Writing in the same Daily Mail article, he called Sally – who is now a DJ – “special”.

Why? Well, because she shared his love of cars.

In fact, James described her as his “perfect woman”.

“Beauty, brains, a good laugh and a love of driving fast in cool cars. A man cannot ask for more. Her cooking isn’t bad, either.”

However, that wasn’t to be and 2009 saw James meet interior designer Julia Dempster in Dubai.

Julia ran her own company out there and, as a result, lived in the UAE.

At the time, she told the Daily Mail: “We just clicked. Sometimes you met someone so perfect you don’t mind about the distance – you just have to do it.”

It’s unclear when James and Julia split up, , but what we do know is that James fell for current girlfriend Louise Davies in 2011.

What has James Martin said about marriage and babies?

James has previously said that missing out on marriage and kids is the “biggest low” of his career.

The TV chef, who presented BBC One’s Saturday Kitchen for ten years until 2016, sees forgoing getting hitched and having children as one of the biggest sacrifices he’s made.

However, James admitted he would “probably do the same again as it’s made him who he is”.

“The biggest low of my career is that I’ve given up everything for it,” he told Prima. “I look at my mates and they’re all married with kids, and that’s not the case for me because I’ve been so focused on work.

How old is James Martin?

James Martin was born on June 30 1972 in Malton, North Riding of Yorkshire.

He is currently 49 years old and turns 50 this summer.

James’ family were farmers on the Castle Howard estate and he helped his mother in the kitchen, which started his interest in cuisine.

What are James Martin’s restaurants?

James opened his restaurant The Leeds Kitchen, inside the Alea Casino in Leeds in 2011. However, the casino and the restaurant closed in March 2013.

In 2012, he opened a restaurant inside The Talbot Hotel, Malton, North Yorkshire. The restaurant won a Michelin star at the end of 2012. However, James Martin left The Talbot in February 2015.

There are four branches of James Martin Kitchen bakery and cafe.

You can find them in Stansted and Glasgow airports, inside Debenhams at Intu Lakeside and at Manchester Piccadilly Train Station.

James Martin appears on This Morning, which airs weekdays at 10am on ITV.

He also presents his own cooking show, James Martin’s Saturday Morning on ITV on Saturdays.