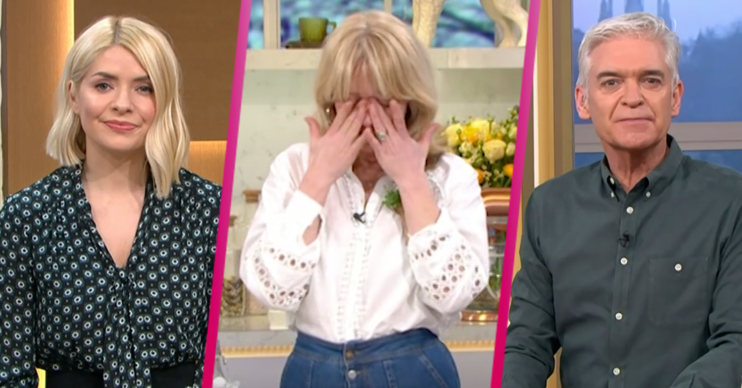 The Irish chef is missing her mum today

The Irish cook was comforted by hosts Holly Willoughby and Phillip Schofield as she broke down during her St Patrick’s Day cooking segment.

She started telling Holly and Phil about the Irish feast she was going to be demonstrating on the show when she burst into tears.

What made Clodagh McKenna cry on This Morning?

Clodagh revealed that she was missing her mum and her homeland during the St Patrick’s Day cooking segment.

She revealed to This Morning hosts Holly and Phil that she hasn’t been home for a year due to the pandemic.

Clodagh then waved to her mum and blew her a kiss as tears streamed down her face.

Holly and Phil rushed to offer her socially distanced reassurance.

Holly said: “It’s days like today that you really think about them isn’t it?

“You are alright and then you have a day when you are meant to be with them and it’s even harder.”

This Morning viewers also in tears

Viewers rallied round the popular chef too – and many revealed they felt her pain and were crying with her.

A third said: “Happy St Patrick’s day Clodagh. I just had a cry with you while you were blowing kisses to your mammy in Ireland, you must miss her so much!

You are alright and then you have a day when you are meant to be with them and it’s even harder.

“Keep doing what you’re doing girl we love you.”

“My heart goes out to you Clodagh,” wrote another.

“I’m missing my mum too! But I’m in Ireland and she’s in London. Breaks my heart I haven’t seen her in so so long.”

When did Clodagh last head home to Ireland?

Clodagh revealed that the last time she went home was just before the first lockdown was announced in March 2020.

Before breaking down, she said: “I remember the last time I went to Ireland and I got to the passport controls, it was just before the lockdown happened, I was going over to see my mum.”

Later in the show, as Clodagh returned to prepare another course, Holly and Phil asked if she was okay.

She confirmed that she was and revealed that she had spoken to her beloved mum on the telephone during a break from the show.

Head to our Facebook page @EntertainmentDailyFix and tell us what you thought of today’s show.