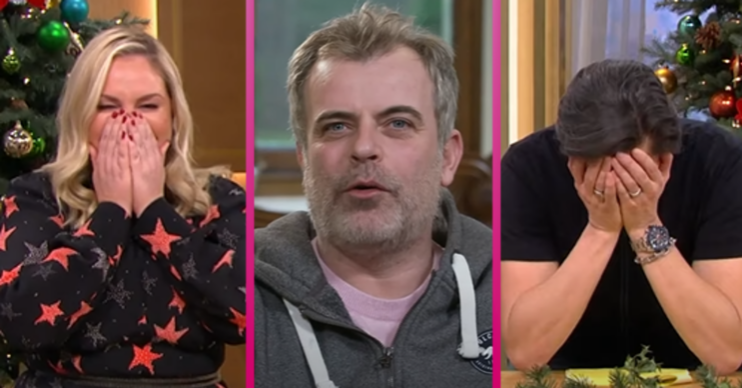 Simon Gregson left This Morning viewers in hysterics today when he appeared on the show following his I’m A Celebrity stint.

The Coronation Street legend finished as runner-up last night as Danny Miller was crowned King of the Castle.

As Simon appeared on Monday’s This Morning, it wasn’t long before the interview descended into chaos as he made a VERY rude comment.

Simon Gregson on This Morning

During last night’s I’m A Celebrity final, Simon faced a vile eating trial as he had to eat a cow’s vagina.

This Morning guest hosts Josie Gibson and Vernon Kay asked Simon about it today and they probably wish they didn’t after Simon’s response!

Simon explained that he hit a point in camp where he was looking forward to eating rice and beans for breakfast.

He then said: “One thing I never thought I’d be looking forward to was eating a hairy vagina.”

Meanwhile, Simon continued: “I mean who on earth looks forward to that? It turns out that I had the largest vagina on like normal TV to eat.”

But Josie then said to Simon: “The thing was it did actually look like a cow’s vagina, didn’t it?” as Vernon put his head in his hands.

Simon asked: “Are we going straight to adverts now?”

Josie replied: “No we’re sticking with you. They didn’t cut it up for you, it did look like a cow’s vagina.

“I was very surprised that it did look like a cow’s vagina.”

Vernon looked gobsmacked as he said: “Welcome to This Morning!”

After that, Simon said: “It actually came the way it came… which is one thing I thought I’d never say on live TV.”

At this point, Josie and Vernon had descended into giggles as Simon carried on describing the cow’s vagina.

Vernon said: “Thanks Simon, appreciate that. Very descriptive so early in the morning.”

Meanwhile, viewers were in fits of laughter, as one person said on Twitter: “This interview [is] amazing. Simon you absolute legend,” followed by a string of laughing face emojis.

#ThisMorning one of the best interviews yet. Simon is great. Must’ve been celebrating all night.

Simon on this morning😭😭😭😭😭😭 #ThisMorning i cant cope.

Another added: “Simon Gregson just casually talking about vagina at 10am. He’s constantly a funny guy.”

A third laughed: “One of the best interviews yet. Simon is great.”