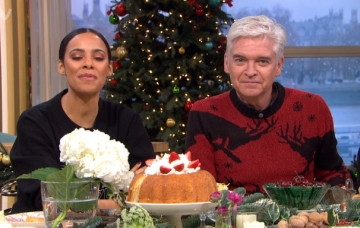 This Morning caught up in Strictly Come Dancing ‘fix’ slur

It’s impossible for a competition-based TV show to run these days without there being cries of ‘fix’.

It’s happened with Big Brother, The X Factor, I’m A Celeb… and Strictly.

Among the accusations aimed at Strictly this year… judges apparently under and over-marking; the BBC being favourably biased towards certain celebs; less capable competitors succeeding because of popularity.

Of course, none of these is actually a ‘fix’, more a potential flaw in the make-up of the show.

Now another programme has been roped into the latest Strictly ‘fix’ slur.

On Friday, Phillip Schofield revealed that Strictly stars Stacey Dooley and Kevin Clifton would be on Monday’s show.

This led to some speculation that they must have some insider knowledge that the couple would win, which they of course did on Saturday night.

“My sister has just made a valid comment as she watched @thismorning yesterday and apparently @Schofe @RochelleHumes said Stacey and Kevin are on the sofa on Monday with Ruth and Eamonn,” a viewer posted on Twitter.

“And my sister thinks it’s a fix as why would they be on unless they were winners #strictlyfinal.”

Hmmm. Well, the less dramatic reason could be that they had seen Stacey and Kevin were the bookies’ faves.

Or that they are simply the most popular of the show’s stars among This Morning viewers!

But let’s not let rational thinking get in the way of some inventive social media stirring.

Doubtless Kevin and Stacey will still be on cloud nine when they appear on This Morning tomorrow – and we can’t wait to share in their well-deserved celebration!

And your Strictly Come Dancing 2018 winners are… @StaceyDooley and @keviclifton! ⭐ They'll be joining us fresh from their win on Monday's show – tune in from 10.30am pic.twitter.com/ukVqEMrlhp

Did the right couple win?  Leave us a comment on our Facebook page @EntertainmentDailyFix and let us know what you think