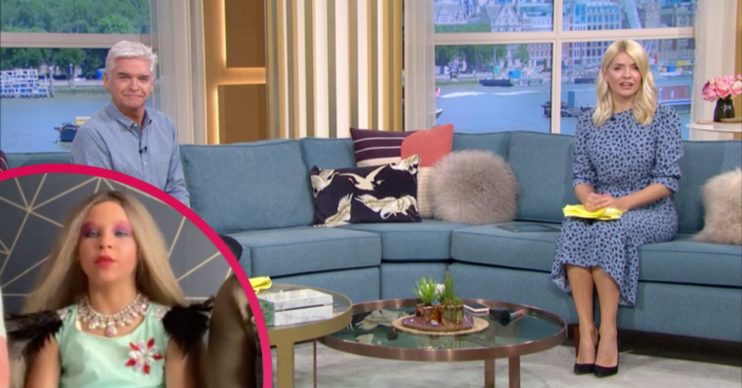 Fabian appeared on the show alongside parents Darren and Rachel

This Morning viewers were left divided as Britain’s youngest drag queen appeared on the show.

Fabian Butler, who performs as alter ego Francheska Valley, was joined by his supportive parents Darren and Rachel on the ITV show today (October 12).

Speaking to hosts Holly Willoughby and Phillip Schofield, the 11-year-old explained how he often liked to experiment with makeup and clothes when he was younger.

Fabian said: “Well about seven years ago I used to put on my mum’s makeup and play around.

“At seven I tried to do makeup properly and started to do stuff properly.”

The youngster then went on to detail how he feels when he takes to the stage as his alter ego.

He continued: “I feel sassy, amazing, completely different and just I can do anything!”

Clearly impressed by Fabian’s confidence, Phil said: “What a great attitude to have!”

Holly also praised the youngster, saying: “You want to bottle that!”

This Morning: What did fans think?

This Morning viewers were just as thrilled to see Fabian living out his dream.

Taking to Twitter, one shared: “Fabian/Francesca on This Morning is absolutely FABULOUS #thismorning.”

Another agreed: “LOVE to see Fabian aka Francesca Valley’s dad being so understanding #ThisMorning.”

However, others believed the 11-year-old was too young to be taking inspiration from smash-hit RuPaul’s Drag Race.

One fan pointed out: “This child shouldn’t be watching Drag Race, it has adult themes ffs #thismorning.”

Fabian/Francesca on This Morning is absolutely FABULOUS #thismorning

Another viewer shared: “I’m all for kids doing whatever makes them happy but there’s something about this that doesn’t sit well with me.

“His mum is very very enthusiastic about him being a drag queen. Almost like it’s her dream rather than his? I dunno #thismorning.”

‘I fully support him now’

During the segment, dad Darren also opened up on what Fabian’s drag obsession meant to him.

He explained: “I was born in the 70s and raised in the 80s and 90s when it was very much frowned upon. So when I did find out I thought it was just a phase he was going through.

“When you have a boy your expectations are that they do boys stuff. But I tried that stuff with Fabian and it didn’t work – he’s just a natural performer.”

He added: “I still have my moment where it’s hard to accept but I fully support him now.”