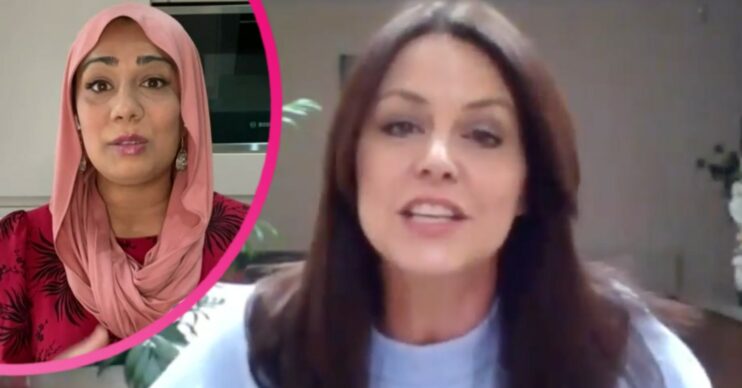 This Morning: Beverley Turner divides viewers as she clashes with doctor in vaccine debate

She strongly disagreed with giving vaccines to youngsters

The pair appeared as guests on the ITV programme alongside hosts Eamonn Holmes and Rochelle Humes.

But as the group discussed whether children should be given the COVID vaccine, Beverley angered some viewers at home.

During Tuesday’s show, the group debated over whether 12 to 15-year-olds should be given the vaccine.

Beverley, 47, disagreed with the decision and seemed visibly angered over the subject.

She said: “I’m hearing daily from parents who are saying, ‘I’m not sending my children back to school in September because I’m so frightened that they’re going to give them a drug that I don’t want them to have.’

Read more: This Morning viewers are convinced Rochelle Humes flashed her knickers on the show today

“At the moment these schools can’t give our kids Calpol without our consent.

“Have we truly lost our minds that we’re talking about giving them an injection that they do not need?”

The medic responded to Bev’s argument: “We need to look at the vaccine programme that’s being rolled out in other countries.

“We already have America that’s been vaccinating 12 year olds and above.

“We have Germany, Italy, Spain that have been vaccinating [children].”

Read more: This Morning fans call out Rochelle Humes over annoying habit that makes them ‘wince’

Dr Nighat went on: “The vaccine is far safer than infection from Covid-19 and that is what we need to focus on.

“We need to focus on getting numbers low as well and keeping children in school.”

Following the debate, Rochelle admitted she was unsure over what to think.

@thismorning Please stop giving anti-vaxxer Beverley Turner airtime. It's reckless broadcasting and it's contributing to the spread of misinformation in this country.

Viewers at home took to social media to share their opinions.

Many disagreed with Beverley, with one saying: “Once again Beverley Turner is spouting forth whatever she can suck up from the internet. It’s quite obvious the fact she hasn’t had a vaccine she’ll not be letting her kids #ThisMorning.”

“The doctor talking with Beverley Turner had the patience of a saint,” a second wrote, while another added: “So dangerous for you to keep allowing Beverley Turner to spout her nonsense. She is so rude.”

Why do you keep inviting on Beverley Turner regarding COVID vaccinations?

A fourth shared: “Why do you keep inviting on Beverley Turner regarding COVID vaccinations? I absolutely think you need to represent both sides in a debate however she is always SO angry when she talks about her side of the debate, in contrast to the doctor who was very calm.”

However, others agreed with the opinionated presenter.

One tweeted: “Guess I’m the only one who agrees with Beverley. There are huge concerns on just dishing out the vaccine to our kids this early on just on a say so.”

Another wrote: “So brave. Willing to put her career and profile on the line to protect her children and defend her beliefs. A hero!”

And a third opined: “Huge thanks to @beverleyturner for speaking up about the important fact that the data shows healthy children are at little risk from this virus but, as per Pfizer’s own trial data, the jab has been shown to pose worrying risks to them.

“As per all clinical decisions, risk/reward is key so it is very concerning that the doctor did not acknowledge the facts Bev gave, seemed to belittle the yellow card system, incorrectly claimed @beverleyturner quoted yellow card when Bev was actually giving Pfizer’s own data.”

A fourth echoed others, simply saying: “God bless you @beverleyturner, keep up the good work.”