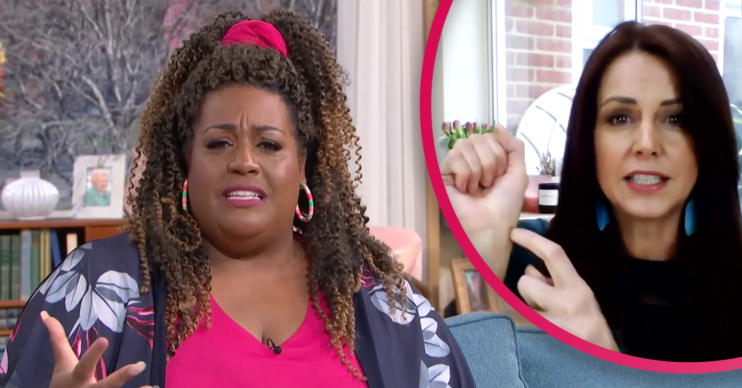 Safe to say Beverley won't be getting a vaccine passport!

Things got heated on This Morning today (March 26) when Beverley Turner launched into an astonishing rant about COVID-19 vaccine passports.

It got so awkward that host Alison Hammond even joked about walking off the set.

As she attempted to sneak off camera, Dermot O’Leary quipped: “Get back here Hammond.”

What happened with Beverley Turner on This Morning today?

The argument broke out during a This Morning debate between Beverley and Matthew Wright about vaccine passports.

She claimed that having an app or paperwork to prove you’ve had the vaccine before entering a pub or restaurant could go too far.

Pointing to her wrist, Beverley claimed it could lead to Brits being microchipped.

Where this ends, and I know this sounds like the stuff of madness, it ends with a little tiny microchip in our hands so that it’s easier to get in the pub.

She said that introducing vaccine passports was “illogical” and that the government “was not being honest with us”.

“Where this ends, and I know this sounds like the stuff of madness, it ends with a little tiny microchip in our hands so that it’s easier to get in the pub.”

With his head in his hands, Matthew slammed her “neo-Nazi ideas”.

He said: “The idea that you’re still talking about herd immunity which does not exist without vaccination.

“You are talking about, essentially, neo-Nazi ideas where the weak die and only the strong survive.

“It is an absolute outrage.”

What did Alison and Dermot do?

With the debate drawing to an end, the hosts attempted to wrap up the awkward segment.

However, it all proved to be a bit much for Alison, who jokingly decided to try and sneak out unnoticed.

Getting up out of her seat while pulling an awkward face, Alison tried her best to get out of shot.

Sadly for her the camera followed her, and Dermot quickly beckoned her back!

Head to our Facebook page @EntertainmentDailyFix and tell us what you thought of the Beverley Turner debate on This Morning today.