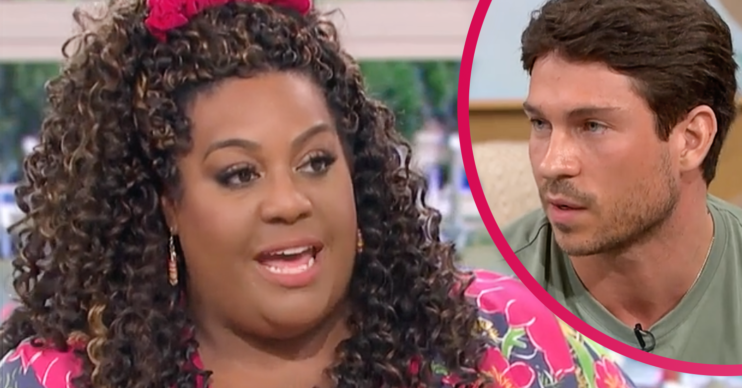 This Morning: Alison Hammond tears up over mum’s death during emotional interview

Alison and Joey both shared their grief

This Morning host Alison Hammond teared up over her mum’s death during an emotional interview with Joey Essex.

The 46-year-old star became emotional while talking to the reality star about a new documentary where he deals with the grief of losing his mother when he was only 10-years-old.

What happened to Alison Hammond on This Morning today?

Joey was in the studio to talk about the BBC One documentary, Joey Essex: Grief And Me.

In it, he faces up to the grief he has bottled up over the years since his mum took her own life when he was only 10.

Alison congratulated him on the achievement.

Read more: This Morning: Alison Hammond and Dermot O’Leary say it took months to ‘get comfortable’ with each other

“I think this is the first time I’ve ever seen you, Joey… authentic, true, pure,” she said.

“I watched the documentary and first of all I didn’t know your mum had taken her life, but secondly, just watching you be your complete, honest self was actually quite refreshing to see.”

She added: “There will be so many people out there who will watch this documentary and think about their own situation and losing someone.”

What did Alison say about her own mum?

Joey went on to explain how difficult it was for him to face up to his pent-up grief and see a therapist.

He also said that he hoped that people who watch the documentary will be inspired to go on their own journey of healing.

“Honestly, when I watched it, it stopped me in my tracks,” Alison replied.

“Obviously, I didn’t lose my mum at aged 10, which I can’t imagine you going through that.

Obviously, I didn’t lose my mum at aged 10, which I can’t imagine going through that.

With her voice breaking and tears beginning to form in her eyes, Alison emotionally said: “But there was a moment you said, ‘I’d give it all up – all the fame, the fortune – for just one hour with my mum.’

Joey then said he wanted to give Alison a hug.

Alison has a lot going on

Alison’s late mother would certainly be proud of her daughter.

Not only is she now a household name, but she recently revealed more career developments.

Last month she told fans about her new book, You’ve Got To Laugh, which details her career and rise to fame.

“I’m so flattered that I was even given this opportunity to write a book,” she said.

“It’s amazing! I mean it is blank at the moment. But trust me! The book will be ready.”

Alison has also been nominated for a National Television Award.

Joey Essex: Grief and Me is on BBC One tomorrow night (Thursday June 3) at 9pm.