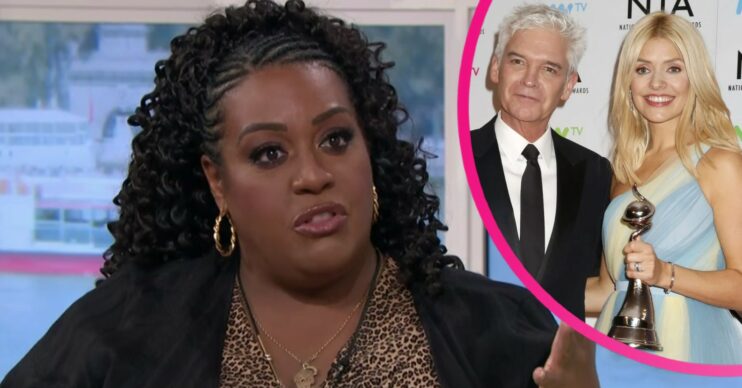 She hosts alongside Dermot O'Leary every Friday

This Morning host Alison Hammond has admitted that she could never replace Holly Willoughby and Phillip Schofield.

The presenter first appeared on the ITV programme in 2003, after taking part in Big Brother.

But after replacing Ruth Langsford and Eamonn Holmes every Friday, Alison has no plans to take over as a main host.

Speaking to Zoe Ball on her BBC Radio 2 show yesterday, Alison revealed that she is happy with her current position.

She shared: “Let me just say, you know what, I don’t think Holly and Phillip should go anywhere first of all.

“And I don’t think I would replace them.”

Alison continued: “And I’ll tell you the reason, mainly because I live in Birmingham, it would be too much to go every single day.

The presenter went on to praise her fellow This Morning stars.

“They are irreplaceable, they’re amazing,” she added.

Alison and Dermot took over hosting duties earlier this year.

Since then, Eamonn has reportedly left the programme to join GB News.

Alison and Dermot to replace Holly and Phillip?

It comes after reports suggested that Alison and Dermot could replace Holly and Phillip in the future.

An insider told The Sun: “There are no firm plans to replace the hosts but producers always keep an eye on potential heirs.

“Alison and Dermot will have been scrutinised during their week-long stint to see how This Morning would look if they took over full-time.”

The source added: “They are very much viewed as a breath of fresh air and have had a largely positive response from viewers.”

Meanwhile, Dermot previously opened up about working with Alison.

In October, he said: “Getting to know her and getting to trust her – our friendship is definitely the highlight. It’s lovely how it’s been nurtured over time.

“I’ve found a sister and a friend, which is nice. Something has really clicked in the last four months.”