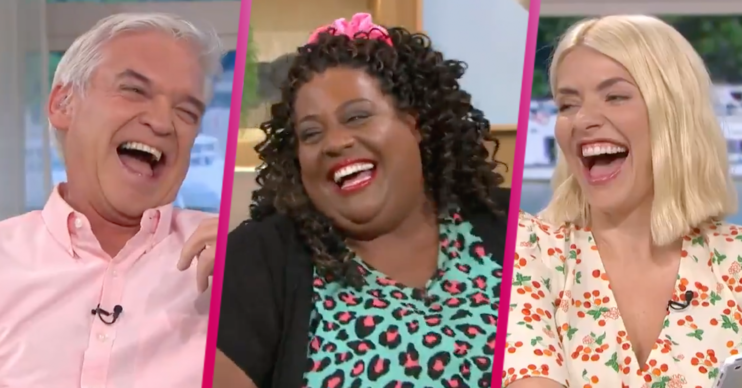 This Morning: Alison Hammond causes hysteria as she shows up despite being replaced by Phillip Schofield and Holly Willoughby

'I know you better than I've ever known you before!'

Instead, Holly and Phil took over Alison and Dermot O’Leary’s slot and hosted their final show before their summer break.

Alison took charge of the balls in Spin to Win, and joined Holly and Phil on the sofa for a chat about where they’d be watching the Euro 2020 final on Sunday.

It was then that hilarity ensued.

What happened with Alison Hammond on This Morning today?

For those who didn’t watch Alison and Dermot’s show last Friday, Alison had an accident in her garden.

She was outside in the pouring rain and slipped on her path.

Read more: This Morning viewers up in arms over Alison Hammond’s Dosh on Your Doorstep segment

The incident was all caught on her CCTV – and the presenter revealed she wasn’t wearing knickers at the time of her fall.

In a clip that was shown, a pink heart covered her modesty.

However, Phil was shown the full unedited “extended version” before presenting This Morning today.

He said: “She did show me the video earlier on this morning.”

“I showed you the extended version,” Alison said.

“I now know you considerably better than I’ve ever known you before,” Phil laughed as he, Alison and Holly erupted into fits of giggles.

Phil continued: “We should point out that Alison fell over in her garden and hurt her leg. I’ve seen the wound and it’s nasty. But as she fell over in the pouring rain she wasn’t wearing any knickers.”

“Thankfully the security camera captured the whole thing so we get to see it in all its glory!” Holly added.

‘That was a hell of a shock when I watched that first thing this morning!’@AlisonHammond shared the moment she fell over in the pouring rain with @Schofe and @hollywills, and they couldn’t stop laughing! 😂 pic.twitter.com/JyhSVItBSb

Alison Hammond on This Morning: ‘You were loving it Phil!’

“It was a hell of a shock when I watched that first thing this morning,” Phil giggled.

“You didn’t stop, you were having a good little look weren’t ya!” Alison retorted. “You were loving it!”

“Then I showed you when my brother was trying to lift me up and you were crying. He started panicking, he couldn’t lift me up!” Alison said, before the CCTV once again flashed up on screen.

Head to our Facebook page @EntertainmentDailyFix and tell us what you thought of the segment.