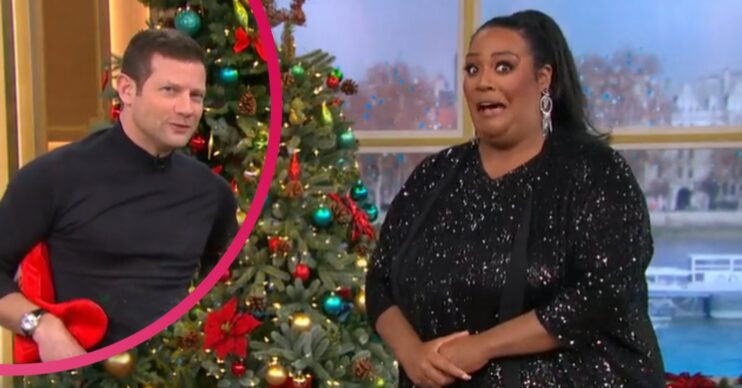 Dermot O’Leary was left red in the face after Alison Hammond made a cheeky remark on This Morning.

The ITV co-stars were in the middle of Friday’s show when they decided to exchange Christmas gifts from each other.

In a bid to make sure Dermot was thinking of her over the holidays, Alison got the hunky presenter some boxer shorts.

However, it wasn’t the gift that caught the attention of viewers but what she said when presenting it…

Alison Hammond makes a cheeky joke on This Morning

She had her face printed all over them, and as she handed them over she teased: “They might not be big enough! According to, er… speculation.”

Dermot then replied: “I need a size large.”

Alison wasn’t finished with the gifts there though. She also got Dermot a mug with her face on it and a doorbell that when rung plays her iconic cackle.

Viewers couldn’t get enough of the silly gifts, with one tweeting: “I love Alison and Dermot. I laughed the first 10 minutes more than I laughed all week.”

Meanwhile, another said:  “Dermot and Alison are the duo that I need on this Feel Good Friday. Absolutely love them, what a great treat!”

Viewers were also excited to hear that Alison will be spending Xmas with one of her This Morning co-stars.

However, it’s not Dermot!

Alison revealed that Josie Gibson will be joining her at her Christmas dinner table this year.

Dermot said: “If I didn’t have a family and stuff, I’d be absolutely around yours this Christmas.”

It comes following reports that Josie Gibson is being lined up for a “bigger role” on the show.

Josie stepped in to host the show again on Monday (December 13), and ITV is now reportedly “investing a lot of time in Josie’s development”.

Do you think Josie Gibson should host This Morning more often? Head to our Facebook page @EntertainmentDailyFix and let us know!