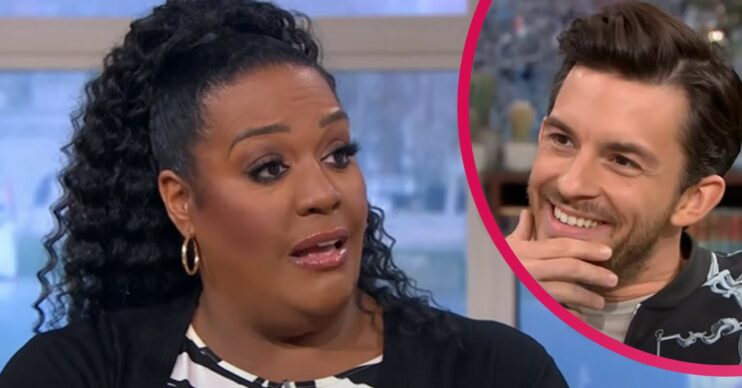 This Morning: Alison Hammond has viewers in hysterics with behaviour towards Jonathan Bailey

Bridgerton star Jonathan appeared on Friday’s show and got more than he bargained for when Alison wanted to recreate a scene.

What happened with Alison and Jonathan on This Morning?

Alison asked the actor: “Going back to the shakey-shakey situation, I heard that you use a netball so that obviously you don’t touch each other?”

Jonathan, who plays Viscount Anthony Bridgerton in the show, said: “Yeah, that’s true. That was a new item…”

Alison then quipped: “Have we got a netball anyone?! So we can get a demonstration!”

Alison then asked how it works and Jonathan began explaining before adjusting his position on the sofa.

But Alison thought he was coming over to her!

She exclaimed: “Oh, I thought he was coming over to show me!” as she, Jonathan and Dermot O’Leary burst into hysterics.

However, things started to escalate from there as Jonathan started leaning towards Alison.

She exclaimed: “I’m ready,” before grabbing a couple of cushions from the sofa.

Alison moved over towards Jonathan as they had three cushions wedged between them.

Through all of this, a giggling Dermot just had his head in his hands!

Alison asked: “So then we just like look at each other or?”

Jonathan, whilst holding Alison’s hand, told her she was passing a screen test with “flying colours”.

He added to her: “I’m knocked off my feet,” as they both burst into laughter.

Towards the end of the interview, Alison appeared a bit flustered as she gushed: “I think you look the same [as your character] now in real life. Sorry!”

Meanwhile, as the show returned from an advert break after the interview, a behind the scenes clip was shown of Alison and Jonathan dancing like the stars do in Bridgerton.

Viewers were in hysterics over the whole segment as one said on Twitter: “LOL @Alison Hammond fan girling over Lord Viscount.”

Alison just makes me smile and laugh so much. She’s just so likeable 😄😁😂 #thismorning

A third tweeted: “Alison just makes me smile and laugh so much. She’s just so likeable.”

Another added: “Oh Alison Hammond, how I love you!! #ThisMorning #bridgerton2,” followed by laughing face emojis.

A fifth said: “Alison is in her element today!!!”

What did you think? Head to our Facebook page @EntertainmentDailyFix and let us know.