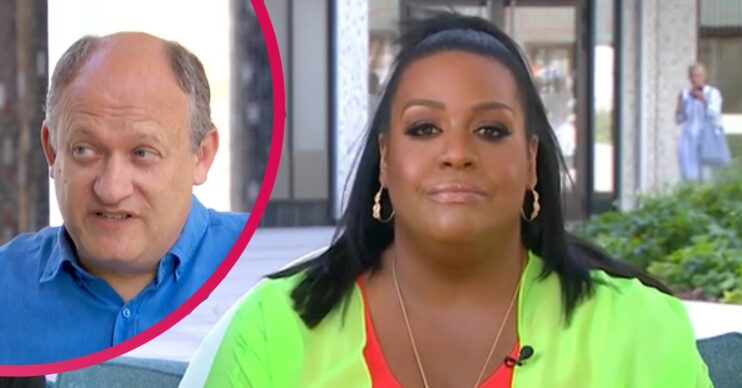 The 47-year-old’s embarrassing moment came during a segment on hay fever, which she suffers from.

Alison Hammond on This Morning today

This Morning host Alison suffered a moment to forget during today’s edition of the show.

During the episode, Alison and her co-host Dermot O’Leary welcomed Professor Adam Fox onto the programme.

Professor Fox was on the show to listen to viewers’ issues with hay fever.

He explained that in the UK, the two main causes of hay fever are grass and tree pollen.

Alison then explained that she had hayfever early on in the year but is fine now. However, her son is “dying” of it.

Alison, Dermot, and Alan then took in viewers questions and issues.

It was during this segment of the show where Alison had her embarrassing moment.

This is my bread and butter.

“So how do you know so much about hay fever?” she asked the hay fever expert. “Did you suffer with it then?”

“I don’t, but I’m a paediatric allergist,” he said.

“This is my bread and butter.”

Viewers of the show were quick to jump on Alison’s “stupid” question – mocking the star for asking it.

“OMG she did not just ask the expert ‘so how do you know so much about hay fever’. I’m dead,” one viewer tweeted.

“Alison is amazed how the hayfever ‘expert’ knows so much about hayfever!” another wrote, adding a facepalm emoji to their message.

Read more: Who is Susie in Coronation Street? What happened with Eva and Toyah?

“He knows because it’s his job Alison…sweet mother of god woman!!” a third wrote.

However, some loved Alison’s star turn on the show today, with one declaring that she’s a “national treasure”.

Sadly the same couldn’t be said for Professor Fox.

Some viewers were also divided over having the hayfever expert on the show at all.

“#ThisMorning basically telling everyone to go to the GP! Get this crap off TV. The NHS is suffering!!!!” one angry viewer wrote.