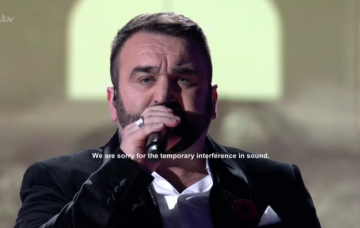 It forced the scrapping of the public vote

The X Factor public vote had to be cancelled on Saturday night’s Halloween special due to a technical issue.

Fans tuning into the ITV show, which had been pre-recorded, were shocked to see the show plagued with sound problems, with viewers saying the sound issues turned the contestants and judges – Simon Cowell, Ayda Field, Robbie Williams and Louis Tomlinson – into “Daleks”.

A message on the screen, where the contestants’ voting numbers would usually be displayed, read: “Due to a technical issue, tonight’s show has been cancelled. It will open in tomorrow night’s show.”

The sound issues began soon after Danny Tetley took to the stage to sing Queen’s Who Wants to Live Forever and continued through his critique from the judges and into Anthony Russell’s performance of’Demons by Imagine Dragons.

A message popped up on screen apologising for the “temporary” sound issues, and an apology was posted on Twitter, where many fans criticised the show.

We are sorry for the temporary interference in sound.

One wrote: “How can people vote on this with sound interference? Come on #ITV sort it out (sic)”

Another added: “Fix the sound quality for us watching please… it’s unfair on the contestants when people are voting for their favourites when we can’t hear properly (sic)”

A third shared: “All acts should not be able to sing until sound is fixed THIS IS NOT FAIR ON THEM.! Sort it out X factor.”

However, some saw the lighter side of it and joked about the “Dalek”sounding voices.

They wrote: “Well I was disappointed when I heard that the Daleks weren’t going to be on #DoctorWho this series, so thanks to @ITV and @TheXFactor for making everyone sound like a Dalek. So sweet of you. #XFactor xx (sic)”

When the show returned after the advert break, the sound had been fixed and Misunderstood performed Halloween hit ‘Thriller’, complete with an energetic dance break.

The public vote will now open during tonight’s show.

Was the right decision made about voting? Leave us a comment on our Facebook page @EntertainmentDailyFix and let us know what you think!