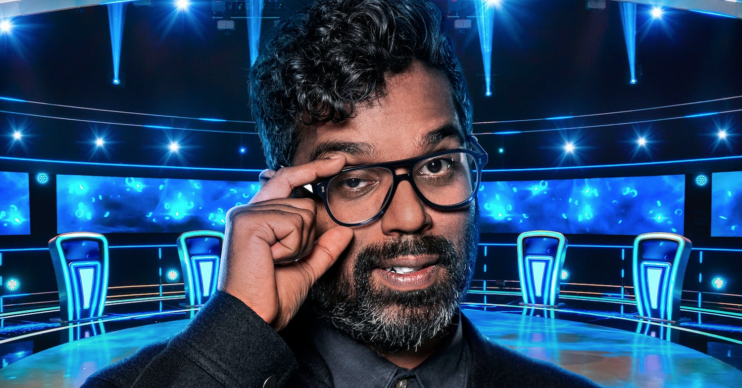 Viewers of The Weakest Link have delivered their verdict on new host, Romesh Ranganathan.

The 43-year-old comedian made his debut over the festive period in the returning quiz favourite.

However, viewers weren’t exactly queuing up to praise him with some even calling him “too nice”.

Why is Romesh now hosting The Weakest Link?

Romesh takes over from Anne Robinson in the veteran quiz show, which was first broadcast on BBC One in 2000.

In a series of nightly shows over the Christmas period, Romesh has welcomed a host of celebrities including Gemma Collins, Nina Wadia, Vanessa Feltz and Georgia Toffolo.

And he’s displayed a much calmer, less antagonistic approach employed by his predecessor.

So much so, viewers bemoaned that “it just doesn’t work”.

So, who really decided to replace the Iconic Anne Robinson and replace her with Romesh

The Weakest link will never be the same without Anne Robinson , she was #Theweakestlink 👑

Romesh and #TheWeakestLink do not work well together. Bad combo.

Romesh is too nice to run this show #Theweakestlink

Viewers soon took to twitter to express their opinions on the new host.

One wrote: “So, who really decided to replace the Iconic Anne Robinson and replace her with Romesh It just doesn’t work. #Theweakestlink #goodbye.”

Another said: “The Weakest link will never be the same without Anne Robinson , she was #Theweakestlink.”

And then a third added: “Romesh and #TheWeakestLink do not work well together. Bad combo.”

Finally, one viewer simply said: “Romesh is too nice to run this show #TheWeakestLink.”

It wasn’t all negative…

However, the reaction wasn’t all bad and some viewers loved Romesh’s friendlier tone.

One said: “Not usually a fan of remakes but #Theweakestlink is class & Romesh is a good host.”

Another wrote: “I think Romesh is great on #TheWeakestLink. He’s given the programme new life. I love it!”

A third added: “People moaning about Romesh on #Theweakestlink should see how awful Anne Robinson is at presenting Countdown. I think he’s doing a good job.”