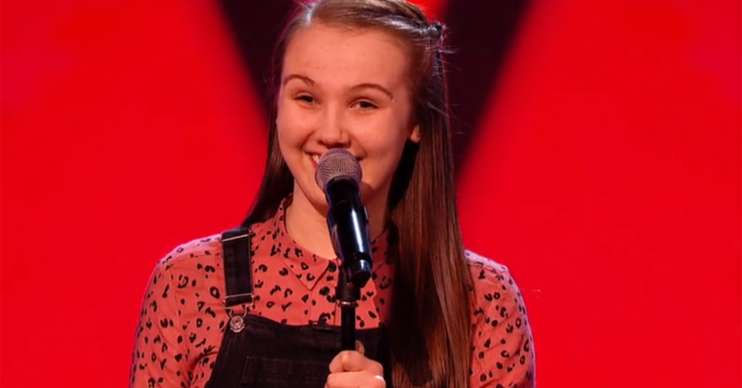 Lydia doesn't let her blindness hold her back

ITV show The Voice Kids left viewers teary-eyed after an incredible performance by a blind contestant.

In the first episode of the new series, blind singer Lydia wowed the judges with her rendition of ‘Your Song’.

She won over two judges with her impressive performance.

As a result, Paloma Faith and Pixie Lott both turned their chairs for her.

Despite not turning around, judges Danny and Will also praised the teen.

Speaking to both judges, Lydia explained how her singing is her passion because she can’t do other activities.

Lydia: “I don’t let anything hold me back”

Before her solo, Lydia’s mum told the cameras on the ITV show that she has always encouraged her daughter to be fearless.

She said: “We were told that there were two ways of dealing with it, you wrap her in cotton wool, or you prepare her to do anything.”

Speaking ahead of her performance, Lydia said: “I was born with a genetic condition affecting my eyes which means that I am blind.

“I don’t let anything hold me back, I love giving things a go and I love surprising people.”

Viewers at home were in bits after her stellar performance.

In addition, another viewer said: “Lydia‘s, got such a clean and pure voice.”

A third said: “I’m sobbing, Lydia on #TheVoiceKids was utterly incredible, I’m so moved. As a fellow VI person I’m so proud of her.”

Another added: “Crying at Lydia, so beautiful.”

Lydia was one of many strong performances on the first episode, which viewers picked up on. One viewer shared: “#TheVoiceKids was brilliant tonight, all of the kids who performed were excellent.”

Another said: “I know there are more important things happening right now but maybe that’s why I’m an emotional wreck watching #TheVoiceKids how fantastic are they.”