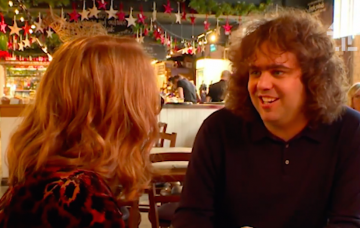 Fans have longed for Daniel to have a happy ending...

Viewers of Channel 4 reality series The Undateables fell in love with Daniel Wakeford three years ago, when he first appeared on the show looking for ‘The One’.

Last night (Tuesday 18 December), in one of the most touching moments on TV, the Brighton-based singer-songwriter melted our hearts by proposing to his girlfriend Lily Taylor.

And, after what some fans described as the “best proposal ever”, Lily said yes!

Understandably, fans went wild and were left “sobbing” and “emotional” at the heartwarming scenes.

Daniel, who has autism, first appeared on the show in 2015 and returned – due to popular demand – for last year’s Christmas special.

Viewers warmed to the curly-haired romantic when he said of a possible date: “We might go to Eastbourne.”

He eventually wooed Lily with a rendition of his song The Black of Lonely and, a year later, plucked up the courage to propose.

Daniel sang Mariah Carey’s festive classic All I Want For Christmas Is You to his shocked and emotional girlfriend, with the help of a choir.

He then said: “I love you. I always have and I always will. And Lily my darling one, will you marry me?”

He then got down on one knee to propose and an excited Lily jumped up and down as she said yes, before Daniel placed an engagement ring on her finger.

Thirty-year-old Daniel shouted: “I did it! We love each other. I’m feeling very excited. What’s the best feeling in the world? Love.”

Lily, 23, said: “I’m so very happy Daniel proposed. We’re getting married! I love him very much.”

Viewers flocked to Twitter in floods of tears, with one saying: “Having a little sob at #Undateables! Damn you.”

Having a little sob at #Undateables! 💍 Damn you 😭

I’m crying and you should all be crying too ❤️ #Undateables

Surely I’m not the only one crying my eyes out at #TheUndateables #Undateables 😍😭?

Daniel proposing to Lily on #Undateables is the best thing I've seen all year. Romance is not dead #AllIWantForChristmasIsYou 🥰🥰🥰🎄

A third remarked: “Anyone else watching #Undateables and crying with absolute joy and happiness?? Congratulations Daniel and Lily. Wishing you a lifetime of fun and laughter together.”

One declared the proposal the “best moment on TV 2018”.

No, no, we’re not crying. We’ve just got something in our eye…

Were you moved by Daniel’s proposal? Leave us a comment on our Facebook page @EntertainmentDailyFix and let us know what you think!