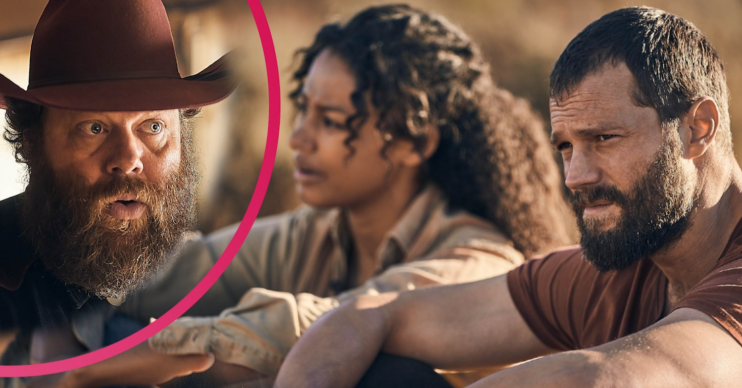 How the heck did he escape the well??!

However, some viewers were baffled by one scene, which all caused them to say the same thing.

What happened in The Tourist episode 3?

In episode 3, Elliot/The Man was finding out more about his identity.

And we also saw some new baddies waiting in the wings, who wanted him dead.

However, bad boy Billy – who rammed Elliot off the road in episode one and has been after him ever since to finish the job – caught up with his prey.

But in a tense hide-and-seek game inside an abandoned cattle shed, Elliot got the better of the killer and clobbered him on the head.

As a bloodied Billy staggered outside trying to get his bearings, he sat down on the edge of a well.

Not surprisingly, he lost consciousness and fell backwards and down 20 feet into the dark hole.

But, as Luci and Elliot said goodbye and went their separate ways, there was a shock for fans.

Billy was seen clambering out of the well and then slumping on its wall.

#TheTourist and this was the point where a half decent thriller turned into a ridiculous farce.
20 foot drop head-first into a well and climbs out 🤣🤣🤣🤣 pic.twitter.com/uJLFHnlsXv

How is billy not dead, after being hit over the head, and falling down a bloody well #thetourist

How did viewers react to the twist?

However, as the twist took hold, viewers were baffled how the baddie managed to get himself out of the well.

One exclaimed: “#TheTourist and this was the point where a half decent thriller turned into a ridiculous farce.

“20 foot drop head-first into a well and climbs out.”

Another said: “#TheTourist Of COURSE the cowboy’s still alive!!!”

Read more: The Tourist locations on BBC One: Where is TV thriller set? Is Burnt Ridge real?

A third added: “How the chuff he’s climbed out of that well!? #thetourist.”

Finally, a fourth asked a question that was on a lot people’s minds.

“How is billy not dead, after being hit over the head, and falling down a bloody well #thetourist.”