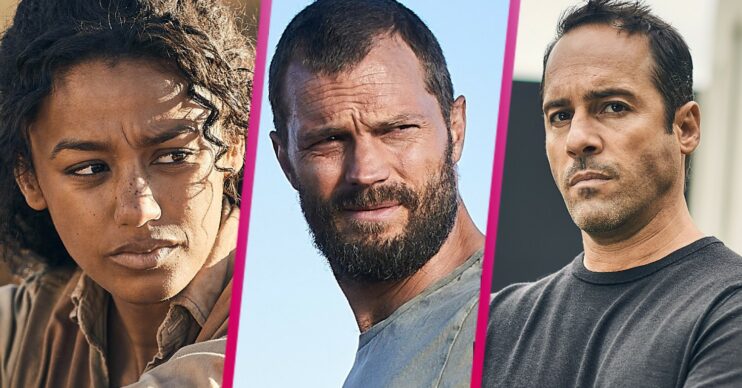 The Tourist on BBC One: Who is in the cast of the six-part thriller opposite Jamie Dornan?

The series starts on BBC One on New Year's Day

Jamie Dornan stars in the hot BBC One drama The Tourist currently airing on Sunday nights – but who else is in the cast?

Fifty Shades of Grey actor Jamie stars as a man who is fighting for his life.

He’s being chased by someone who wants him deader than a dodo.

The trouble is, he can’t remember why he has enemies or even who he is, after (allegedly) losing his memory in a car accident.

Here’s everything you need to know about the six-part drama.

Jamie Dornan, 39, stars as a British man, known only as The Man, who finds himself being pursued by a vast tank truck trying to drive him off the road.

Cue him waking up in hospital with no memory of who he is, and a string of shadowy figures from his past intent on killing him.

But why? What has he done to attract their attention? And what’s he hiding?

Fifty Shades of Grey fans will know Jamie from his role as Christian Grey in the franchise.

TV viewers will recognise him as Sheriff Graham Humbert – aka The Huntsman – in Once Upon a Time, and Abe Goffe in New Worlds.

He proved his villainous credentials in The Fall, when he played cold-blooded serial killer Paul Spector.

Speaking about the role, Jamie said: “The Tourist are some of the most exciting scripts I’ve ever read.

“I can’t wait to go to Australia with such a talented group of people.”

Who plays Luci in The Tourist? Shalom Brune-Franklin does!

Shalom Brune-Franklin, 27, stars as Luci in the cast of The Tourist.

Although Shalom has recently starred in several high-profile British dramas, she’s actually lived in Australia since she was 14.

So the accent isn’t such a stretch for the actress!

She also starred as DC Chloë Bishop in Line of Duty, Lilly in War of the Worlds, and Sister Igraine in Cursed.

At the age of 18, she moved to Los Angeles to pursue acting full-time.

Film fans probably know Danielle for her breakout role as ‘Patti’ in Fox Searchlight’s Patti Cake$, as well as the title character opposite Jennifer Aniston in Dumplin’.

Who plays Billy in The Tourist cast? Ólafur Darri Ólafsson does!

He’s known for his roles in The Missing, The BFG, True Detective and a bunch of Scandi dramas owing to the fact he’s lived in Iceland for most of his life.

Scandi-noir fans might know him for playing the lead role in three seasons of Trapped.

He’s also played The Archer in The Dark Crystal: Age of Resistance, Ariel Helgason in the Widow, and Skender in the film Fantastic Beasts: The Crimes of Grindelwald.

The Tourist cast – who else stars in the six-part thriller?

The six-part thriller also stars Damon Herriman as Detective Inspector Lachlan Rogers in the cast of The Tourist.

Damon joined the series after Hugo Weaving was forced to quit due to scheduling issues.

Damon played Charles Manson in Mindhunter, Dewey Crowe in Justified and Laver in the recent BBC hit The Serpent.

He’s also well known for his roles in Australian films and series, including Secret City.

He is known for playing Harry in The Slap, and Detective Peter Alexiades in The Cry.

The Tourist continues on BBC One on Sundays at 9pm, or it’s available to binge on iPlayer.