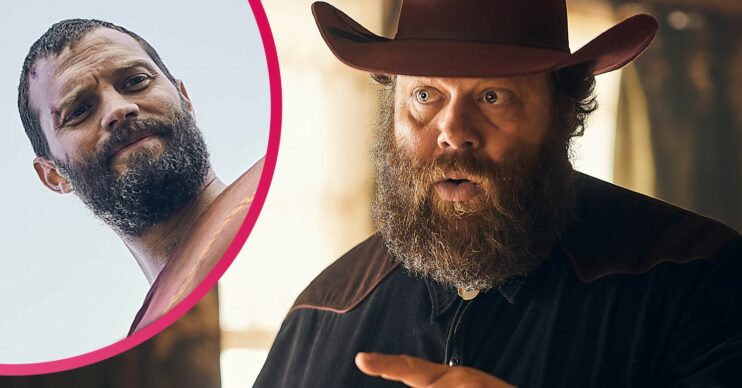 The Tourist episode three review: 10 questions we have after watching explosive episode!

The Tourist continued this week with episode three, and it was another nail-biting episode – so here’s our review!

After watching the explosive drama on Sunday night (January 09 2022), we still have more questions than answers about mysterious Elliot.

Not to mention the man – or men or women – trying to kill him.

Here’s 10 burning questions we have after watching episode three of the brilliant series.

(And frankly, we’re surprised we narrowed it down to 10!)

***Warning: spoilers from episode three of The Tourist ahead***

Read more: The Tourist on BBC One: Who is in the cast of the six-part thriller opposite Jamie Dornan?

Who is Kosta and what is his beef with Elliot Stanley?

Kosta appears to be a shadowy figure with a vested interest in Elliot.

We know he once “scrabbled around in the sewers of Athens”.

But now he seems far from poor.

He lives in luxury, is driven around in a posh car, and has staff working for him.

We also know that he has beef with Elliot Stanley – but why?

Our guess is that Kosta is the man trying to kill Elliot.

We just need to know why now!

The Tourist episode three review: Who did Elliot kill and why was the man after him?

Luci, if she is to be trusted (probably not), has told Elliot he killed a man who broke into their hotel room.

She told him that by killing the intruder, Elliot had “made some bad people angry”.

So who was the man Elliot killed, and why was he in their bedroom?

Read more: Good crime dramas coming to BBC One in 2022 – from The Tourist to Better

Who was the man buried alive and what is his connection to Elliot?

Meanwhile, Elliot and Luci were unable to save the man trapped underground.

As if being buried alive in the sweltering heat wasn’t horrendous enough, a scorpion dropped on him from a height.

We’re not sure we’ll ever sleep soundly again.

But who was the man, why was he buried alive, and how was Elliot involved?

The Tourist episode three review: Who was Elliot before he met Luci?

He now know how and when Elliot met Luci.

But when Elliot asked Luci where he’d been before meeting her in Bali, she had no answers.

She explained that Elliot didn’t like to talk about himself.

Anybody else hear some LOUD alarm bells?

We want to know why Elliot is so far from home, why no one is missing him, and who he was before all this drama started!

Is Billy impossible to kill?

Billy has to be one of the most chilling villains we’ve come across in a long time.

And he seems to be impossible to kill.

He’s been shot, stabbed, pummelled and thrown down a well – but still managed to crawl out of it alive like a larger-than-life cockroach.

And, while we’re on the subject of Billy, we can’t help wondering what his mum REALLY did for a living?

The Tourist episode three review: Who is the lady in Elliot’s dream?

Elliot is haunted by dreams of a dark-haired woman standing by a window.

He claims not to remember who she is.

The mysterious woman seems to be calm, and smiling at Elliot in a reassuring way.

Could it be Elliot’s mum, sister, or even his lover?

When will Helen see sense and dump Ethan?

We can’t be the only viewers who want to see Ethan thrown down a well, too?

Or even better, buried alive with a scorpion.

He’s passive aggressive, controlling and not good enough for the lovely Helen!

To top it all off, the stupid moron gave Billy everything he needed to track down his wife and do her harm.

The Tourist episode three review: Why does Sue look so familiar?

Soap fans might recognise Genevieve as Brenda Riley in Neighbours, and Hazel Easton in Home and Away.

She’s a well known and popular actress Down Under.

Will Elliot and Luci meet again?

During episode three, Elliot and Luci decided to part ways.

After reigniting their old passions, Luci did a U-turn and told Elliot she couldn’t help him anymore.

Something tells us the pair will meet again – but whether they’ll be on the same side remains to be seen.

At the explosive end of episode three, unkillable Billy is waiting for Luci in her home – armed and dangerous.

But they clearly already knew each other…

So how do Billy and Luci know each other? And why did Billy call her Victoria and not Luci?

Which makes us wonder how Luci/Victoria even knew Elliot had been in an accident…?

Was it Billy who told her in the first place?

All will be revealed (we hope) in episode four of the BBC One drama!

The Tourist continues on Sundays at 9pm on BBC One. The entire series is available to binge in BBC iPlayer.

BBC One Jamie Dornan The Tourist