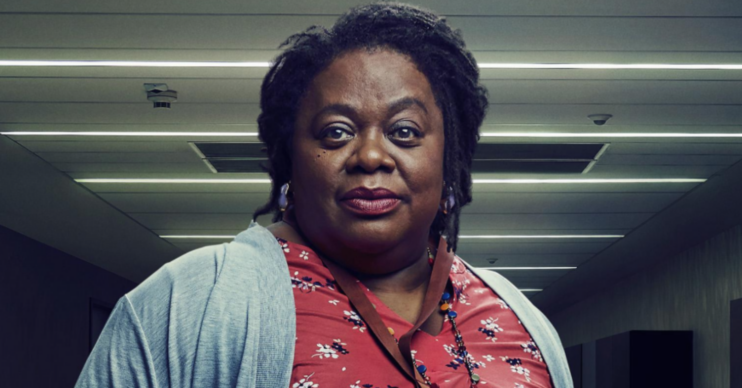 We don't know what to think about Pauline now!

And this development is blowing viewers’ minds. Pauline is supposed to be Jenna’s best friend. Is she in on it, too? Is she clueless about Brian’s bad behaviour?

What happened in episode 3 of The Teacher?

After Jenna realised at the end of episode 2 that she hadn’t slept with pupil Kyle, she was on a mission to find out what really happened that night.

First she discovered that her colleague/lover Jack had actually picked her up from the club – and then learned that the offensive emails she’d been sent were from pupil Izzy, Kyle’s girlfriend.

When she received offensive images on an old school brochure from her former workplace Hillsden, she spotted a suspicious-looking man.

Later in the episode, Kyle visited the man he’d been working with to set Jenna up – and he was then revealed to be Brian, Pauline’s partner. The same man in the brochure!

Whose side is Pauline on in The Teacher?

Some viewers think that Brian is actually Kyle’s father and is in some way connected to Jenna’s dad too. And that the only reason he got involved with Pauline was to get close enough for revenge.

Read more: The Teacher episode 3: 9 questions we need answers to in the final

My Theory is that man in Pauline’s house is Kyle’s father & he hates Jenna from their younger days and probably has something to do with her father too. He probably got involved with Pauline just to get close for his revenge.🤷🏽‍♀️#TheTeacher

I think that #AngryArnold aka Pauline's #BoyfriendBrian got Mary pregnant at Hilsden. But that no-one knows that he's Kyle's Dad. She probably kept the baby and kept the paternity quiet. So #AngryArnold is now gunning for Jenna. Ooh 'eck! #TheTeacher pic.twitter.com/IJjRH6Gi5z

Others think that Pauline is fully aware of who her new boyfriend is and is actively helping him exact revenge on Jenna after she caused him to lose his job.

How about this #TheTeacher Kyles Mum was abused & got pregnant as a schoolgirl by the teacher whose photo was in the Hillsden magazine on the Geography field trip, who now lives with Pauline. Jenna taught at Hillsden in 2005 & exposed the teacher for kiddiefiddling.

Others just can’t seem to decide!

Pauline in The Teacher is definitely acting strangely!

Yet more viewers have found Pauline something of a distraction… is she behaving oddly because she’s scared of Brian or is the role just badly acted?!

Why is Pauline weirdly subservient when she’s with Brian? #TheTeacher

Pauline seems terrified of him #TheTeacher

I knew it’d come back to Pauline. Why she acting like a stepford wife though?! #Theteacher

Read more: The Teacher viewers are all saying the same thing after THAT stunning twist in episode 3

The Teacher concludes tonight (Thursday, Feb 3) at 9pm on Channel 5