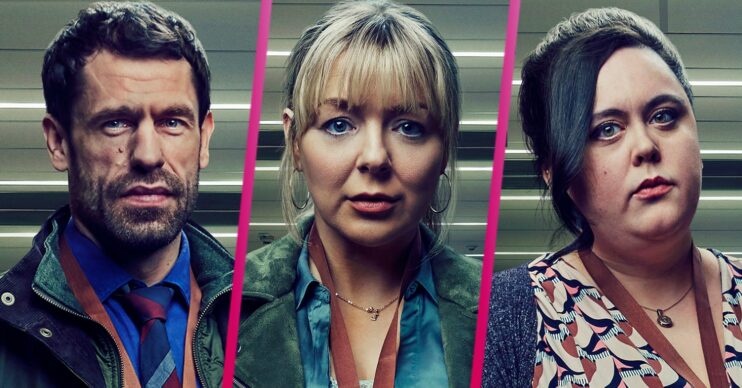 The Teacher on Channel 5: Who’s in the cast of drama opposite Sheridan Smith?

Sheridan Smith stars as a disgraced Head of English in brand new C5 series The Teacher this week – but who else is in the cast of the thought-provoking drama?

Cilla actress Sheridan portrays a teacher who is accused of having sex with a pupil.

It’s illegal, unethical, and a serious abuse of trust – but did she actually do it?

Here’s everything you need to know about the cast of The Teacher on Channel 5.

Sheridan Smith stars as a teacher who is accused of sleeping with a minor in brand new Channel 5 drama The Teacher.

Jenna Garvey is a popular teacher at a Bradford comprehensive, with a chaotic private life.

She is a heavy drinker prone to blackouts and casual sex – and waking up next to an unfamiliar body is nothing new.

However, life gets even more tangled when Sheridan’s Jenna is accused of sleeping with a 15-year-old pupil on a night out.

Of course, she’s perhaps best known for playing Cilla in the series of the same name, Ruth ‘Rudi’ Smith in Gavin & Stacey, and Emma Kavanagh in The Royle Family.

She’s also played Sam in Cleaning Up, Miranda Locke in Holby City, Sandy Beech in Eyes Down, Brandy in Benidorm, and Janet in Two Pints of Lagers and a Packet of Crisps.

Most recently, Sheridan played bereaved mother Sarah Sak in Four Lives, and will soon star in No Return on ITV.

The Teacher cast – who plays Kyle?

Viewers see Jenna and schoolboy Kyle dancing sweatily in Lazarus nightclub as she celebrates her promotion to Head of English.

Quite what happened on that night has enormous consequences that haunt both of them over the four-part drama.

Actor Samuel has been on our TV screens since he was nine, when he starred in the award-winning film Tyrannosaur opposite Olivia Colman.

He went on to play a young Thomas Cromwell in Wolf Hall, Brandon Kelleher in Rocket’s Island, and George Quaintain in Jericho.

More recently, he starred as Ralph Roberts in Ladhood, Dean Paxton in Everybody’s Talking about Jamie, and Jordan Wilson in Ackley Bridge.

And, like Nadeem Islam in The Bay, actor Samuel is quite a bit older than his on-screen alter-ego.

He’s actually 20, not the 15 years his character is supposed to be!

Kelvin Fletcher plays Jack in The Teacher on C5

He was just 10 when he first appeared on the fictional farm.

Since leaving the ITV soap, Kelvin has appeared in Death in Paradise as Gavin, and Nathan in Moving On, among others.

He also won Strictly Come Dancing in 2019 and is currently appearing on the BBC One fly-on-the-wall Kelvin’s Big Farming Adventure.

The series follows him and his family as they set up their own farm.

Who plays Nina in The Teacher? Sharon Rooney does!

Sharon Rooney plays Nina in the cast of The Teacher on Channel 5.

She went on to play Jules in Mountain Goats, Brodie in Stag, and Dawn in Brief Encounters.

Sharon has also played Sophie in Two Doors Down, Kiki Stokes in The Tunnel, and Faye Caddy in No Offence.

She’s also appeared in The Capture, Jerk, Zapped and McDonald and Dodds.

Later this year, Sharon will be reprising her role of Nicola in the second series of Finding Alice opposite Keeley Hawes.

Who plays DI Soweby in The Teacher?

Karen Henthorn portrays DI Soweby in The Teacher on Channel 5.

Actress Karen, 58, is perhaps most famous for her roles in soaps.

Karen also portrayed Julie Haye in EastEnders from 1997 to 1998.

Of course, soap fans will know the 63-year-old actor from his role as Owen Armstrong in Corrie.

He played the new landlord of Weatherfield’s Rovers’ Return during his time on the cobbles, between 2010 and 2015.

The Teacher cast – who else stars in the C5 drama?

Some soap fans might recognise him for playing DI Drake in Emmerdale for a handful of episodes, and another copper in Corrie – this time Superintendent Jevons.

The Lady in the Van actress Cecilia Noble stars as Pauline Booth.