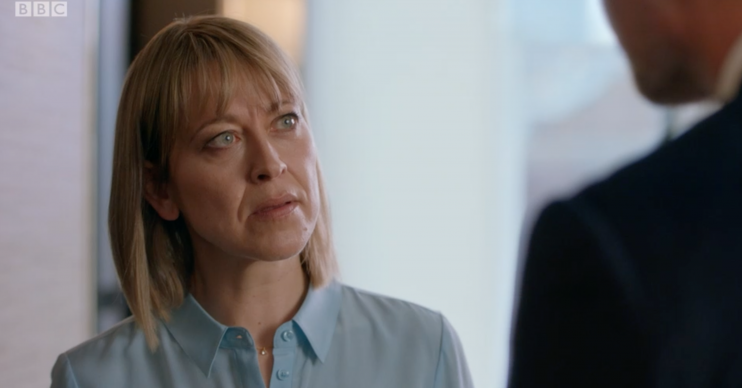 Fans of BBC One legal drama The Split are wondering whether Hannah‘s old flame – and current secret lover – Christie may be the right man to be in her future after his suave front seems to be crumbling under the pressure of their affair.

Hannah’s family and career have remained at the front of her mind, even as she has been carrying on with her colleague.

Christie, however, has found it difficult to keep their love on the low-down, even if he appreciates a certain amount of discretion is required to protect them at home and work.

With Hannah resisting increasingly insistent requests to discuss their relationship, a frustrated Christie slammed his office door and struggled to keep a lid on his emotions.

Read more: The Split viewers divided over who Hannah should choose to stay with

A work conflab which also included Hannah’s husband Nathan – with whom she seems to be warming to again, following the pain of his previous betrayal – hardly helped matters. And even Nathan seemed able to sense tension from Christie which felt particularly personal, rather than professional.

Being invited to Hannah and Nathan’s 20th wedding anniversary bash brought about more door-slamming from Christie, swiftly followed by some surprisingly vicious kicks aimed at his desk.

I knew Christie was a narcissistic sociopath.

And it was at this point that some viewers began to wonder whether Christie’s outbursts could prove to be a red flag for even worse behaviour.

As with previous episodes in this second series, Christie certainly retains legions of admirers from those watching at home.

Read more: The Split divides viewers as it returns with series two

But a flashpoint moment after Hannah bridled at his apparent pejorative description of her as “ambitious” lost Christie plenty of fans – even as she tried to explain why she was still devoted to Nathan.

“You ever loved two people?” she asked him.

Until this point in the episode, Christie commanded plenty of sympathy with viewers commenting about the programme on social media.

Another tweeted: “Poor Christie. Hannah is making a mistake.”

And yet another person added: “My heart breaks for Christie, he’s a goodish bloke.”

“I knew Christie was a narcissistic sociopath. Lashes out when his coercion doesn’t work. #TheSplit,” one viewer reacted.

“Christie seems to have turned Mr Nasty,” said another.

And a third person put it succinctly: “This ‘Christie’ guy is a [bleep].”

Even though Christie subsequently suffered in silence at the anniversary party as Nathan prodded him – admitting he had once “hated” his love rival when they had been students – before the bombshell revelation that Hannah aborted their baby just after she got married, some fans were not willing to forgive his flashes of rage.

“This is where Christie explodes,” one tweeter predicted.

And another social media user declared: “I do feel sorry for Christie but his outbursts have just been too much.”

I could probably tweet this every time I watch #TheSplit but Christie… pic.twitter.com/hNR0iqTeb4

But even with indications that Hannah may be coming round to putting her marriage first after becoming intimate again with Nathan – who joked she had picked up some new “moves”, not everyone has given up on her and Christie getting together for good.

That’s despite Hannah fielding a very difficult question from her eldest daughter about how she could possibly forgive her husband – and seemingly signalling that one love may have won out over another.

“It matters. It just matters less than it did. I don’t know how. But somehow, it hurts less,” Hannah told teenager Liv.

One determined viewer, however, attached a heartbroken emoji to their post, pleaded: “Christie and Hannah literally kill me. They belong together #TheSplit.”

The Split continues on BBC One next Tuesday, February 25 at 9pm.