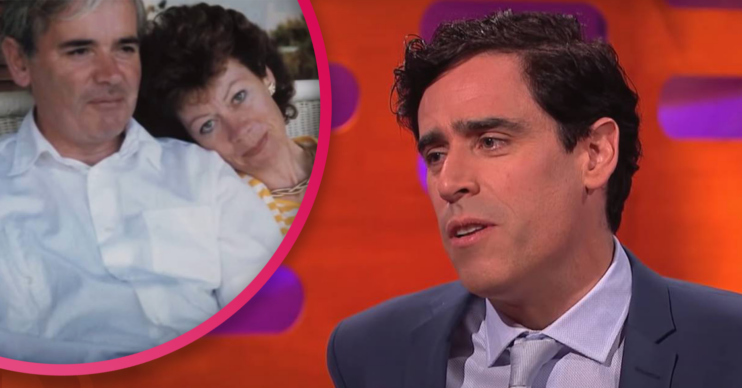 Both tragically passed away six months after their diagnoses

The Split star Stephen Mangan specialised in comedic roles before his absorbing leading man turn in the BBC One drama.

But fans of the Adrian Mole, Green Wing and Episodes actor saw a different side of Stephen in real life when he opened up about his family tragedies in 2016.

Nathan Stern star Stephen, now 53, spoke emotionally about losing his mother and father for Stand Up To Cancer.

A few years earlier, he also addressed how cancer affected his parents, his sisters and himself.

The Split star Stephen Mangan on losing his mother to cancer

Stephen recalled in the summer of 2012 how his mother had been diagnosed with colon cancer just after he left university.

The Split star Stephen, who had not yet reached the age his mother died when speaking to Metro, admitted he found it a “ridiculously” early age to die.

Read more: Confused fans of The Split call out plot hole in the wake of James’ death

He detailed how helpless he had felt in the face of his mother’s illness but was grateful to be able to care for her.

Stephen reasoned: “The only good aspect of this terrible situation is that you’re given warning someone is dying.

“You are given the opportunity to say things to the person you wouldn’t have said if they suddenly died in an accident.”

Tragically, in 2005, Stephen also lost his father to cancer. He died of a brain tumour aged 63.

Stephen said at the time how it felt “wrong” that his dad was never able to meet his kids.

But Stephen – who consequently had regular colonoscopies – insisted he has to continue with life.

You can’t go around thinking you’re going to die all the time.

He reflected: “A lot of people live in denial and don’t want to think about what might happen. I find being aware the clock is ticking makes being alive feel more special.

“You can’t go around thinking you’re going to die all the time but life is precious because there isn’t that much of it.”

The Split airs on BBC One, Monday May 2 at 9pm – or binge the lot on iPlayer now.