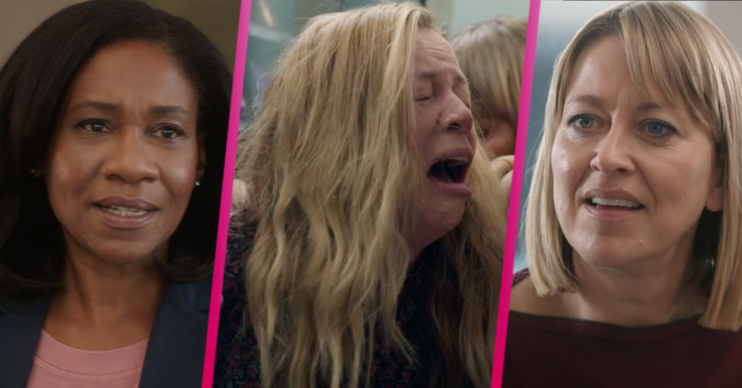 Series 3 of The Split started on BBC One last night (April 4) and what an episode it turned out to be.

It’s been six months since we last saw the Defoe family of fierce lady lawyers, and you’d be forgiven for thinking at the start of the episode that Hannah (Nicola Walker) and Nathan (Stephen Mangan) are going to get back together.

A laugh over a couple of giant glasses of red wine (to remind us that they actually really do like each other).

Talking about their eldest daughter’s year off (to remind us that they have a long history).

Shots of them hovering with a pen over signing divorce papers (to remind us that neither of them might want to do it).

The Split series 3: Back with a bang!

“He wasn’t meant to fall for someone else,” sobbed Hannah to her mother Ruth.

“Why can’t they just have meaningless sex,” Ruth pondered in reply. Before quickly adding: “I had a call from Christie last week.”

And there we have it.

Read more: Dermot O’Leary ‘very excited’ to bag a role in The Split

The mother comforting her daughter over the pain of her soon to be ex-husband’s new, irritatingly accomplished fresh filly by declaring that her daughter’s hot ex-lover is going to be back in town.

Though, as ever, it’s always hard to be entirely on Hannah’s side. Or any of the characters.

They probably don’t have to worry about utility bills.

In brighter news we’ve seen the first of a few famous cameos – Lindsay Duncan as a Countess warring over her dead ex-husband’s will.

There are some eye-raising Fifty Shades whips involved.

And dear Rose and James are hoping to adopt a baby. Will they get their wish? Not while she’s having second thoughts.

There was even a huge spoiler on what was to come after the end credits rolled.

Episode one showed Lenny wanting out of her seemingly perfect marriage, going to Hannah for divorce advice.

No one appeared to have any clue as to why… which is where the BBC voiceover artist came in at the very end of the show, offering viewers a helpline for motor neurone disease…

There is much to repel and compel you about The Split.

Everyone’s got too much money and status to make you really sympathise; but then you get so drawn in, suckered by the emotions, the upheaval.

You love every second in a ‘I’ll just have a cup of tea and work out what shade of white that wall is painted in’ way.

Now we know we can’t tear our eyes away – bring on episode episode of The Split.

The Split is on Mondays at 9pm on BBC One or binge the whole thing now on iPlayer.

Head to our Facebook page @EntertainmentDailyFix and tell us what you thought of the episode.