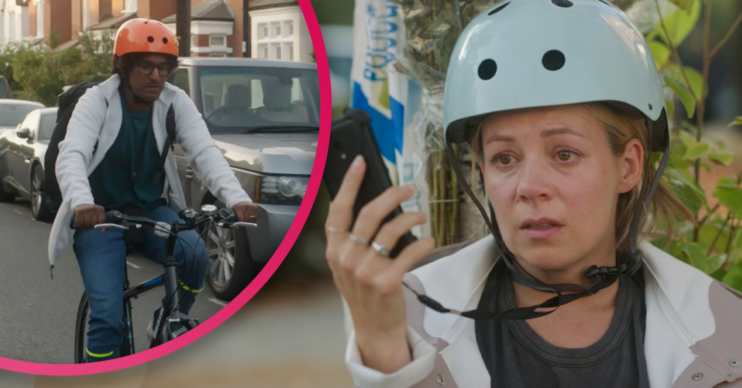 The Split: Confused fans call out plot hole in the wake of James’ death

He was knocked off his bike and killed in episode one

Last night’s episode of The Split opened with the Defoe family cleaning up after James’ funeral.

Of course, he tragically died in a cycling accident at the end of the first episode, living wife Rose distraught.

Away from the Hannah and Nathan drama last night, viewers watched as Rose went to collect her late husband’s belongings.

This included his mobile phone – with that message from Nathan – and the bike that he was riding when he was knocked down and killed.

Read more: Deadline on Channel 5 – who’s in the cast and where was it filmed?

While some said that it was doubtless a tough situation for poor Rose to be in, others pointed out what they saw as a bit of an error on the BBC’s part.

The bike, which had been hit by a van, killing James, appeared pretty much unscathed.

Not only could viewers not seen any visible damage, the bike appeared to be working so well that it was still roadworthy.

And, not only that, Rose was able to ride it around town, heading to the place her hubby was killed before playing him her last voicemail message to him.

Fans of The Split were quick to joke that James’ bike was perhaps made of “titanium”.

“James’ bike must’ve been made out of titanium in #TheSplit,” joked one.

“Strange how the bike was so easily rideable post fatal accident!?” said another.

Strange how the bike was so easily rideable post fatal accident!?

A third asked: “How was that bike still rideable?”

“That bike looks good having been part of a fatality,” another agreed.

Strange how the bike was so easily rideable post fatal accident!?#TheSplit pic.twitter.com/lhvnCRNntR

Where can I watch The Split?

The Split airs weekly on Mondays at 9pm on BBC One.

Or you can watch the whole thing now on iPlayer.

Head to our Facebook page @EntertainmentDailyFix and tell us what you think of the third and final series of The Split.