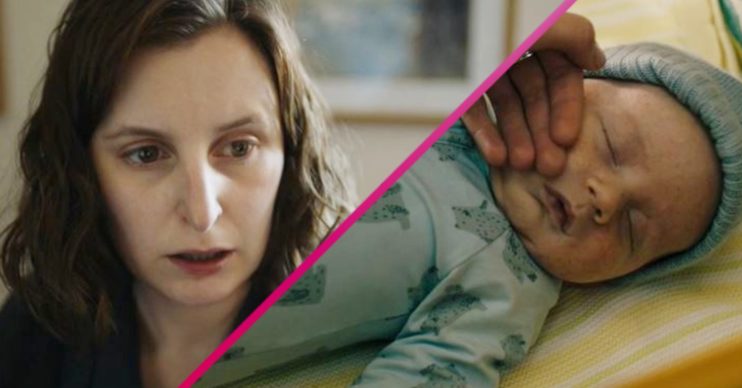 The Secrets She Keeps: Viewers ‘stressed’ over sick baby scenes

Some are finding it tough to watch

BBC viewers were stirred up last night as a scene involving a sick baby in The Secrets She Keeps had them ‘screaming at their screens’.

What happened with the baby on The Secrets She Keeps?

In the fifth episode, Agatha’s boyfriend Hayden (Michael Sheasby) – whom she told is the father of the baby she secretly stole from blogger Meghan (Jessica De Gouw) – started to grow suspicious.

And when baby Ben (or Rory, as Agatha calls him) grew visibly ill, Hayden begged her to take him to the hospital. But she feared attention from medical professionals would expose her secret, since she didn’t have the tot’s birth certificate or hospital records.

Read more: True story behind The Secrets She Keeps took place in Britain and shocked the nation

When Agatha eventually took baby Ben to see a GP, the scene boiled over when the doctor called an ambulance.

It ended with Agatha rushing out, clutching the sick baby, to jump in a cab and go on the run.

Screaming at the TV.

In the closing scene, viewers saw that Agatha has a hidden burial ground – with three tiny, baby-sized graves.

Reacting on Twitter, viewers were fuming that Agatha was putting her own freedom ahead of the baby’s life.

What did viewers say about the penultimate episode?

Others admitted finding it a “hard watch” and called the programme “traumatising”.

One viewer tweeted: “Wow Agatha, you are something else #TheSecretsSheKeeps.”

Another said: “Omg Agatha help him.”

A third put, alongside three angry-face emojis: “Screaming at the TV.”

Wow Agatha, you are something else #TheSecretsSheKeeps

Screaming at the tv 😡😡😡 #TheSecretsSheKeeps

“Omg I am watching through my fingers!” someone else admitted. “Hate seeing babies and children sick #TheSecretsSheKeeps.”

Another branded Agatha’s character “thoroughly unpleasant” and difficult to empathise with. Others said it was stressing them out.

“#TheSecretsSheKeeps calling a doctor? Not straight to A&E?” said one gobsmacked viewer, as Aggie pretended to ring her GP instead of whisking the baby straight to a hospital.

A sixth asked: “Is anyone else finding #TheSecretsSheKeeps a hard watch?”

“I have dipped in and out and am finding it very traumatising,” another replied.

Omg I am watching through my fingers ! Hate seeing babies & children sick #TheSecretsSheKeeps

Agatha is thoroughly unpleasant Can't empathise with the character #TheSecretsSheKeeps

Binge watching. I’m on episode 5, it’s stressing me out so much but I need to know what happens #TheSecretsSheKeeps

– The Secrets She Keeps concludes tonight (Tuesday, July 21) at 9pm on BBC One

What do you think of the series so far? Leave us a comment on our Facebook page @EntertainmentDailyFix and let us know.

BBC Drama The Secrets She Keeps