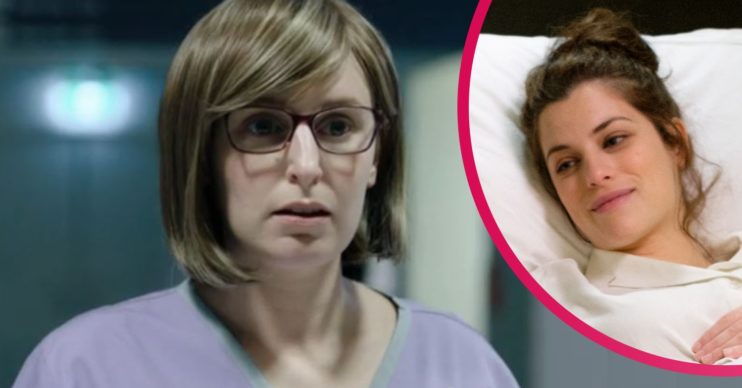 The Secrets She Keeps: Viewers point out plot holes in episode three

Some questioned how realistic it was

Eagle-eyed BBC viewers took to social media last night to point out what they thought were plot holes in episode three of Australian drama The Secrets She Keeps.

The gripping six-part series continued on Monday (July 13) evening and ramped up the tension with one scene people found particularly distressing to watch.

During the third instalment, shop worker Agatha (Laura Carmichael) – having faked her pregnancy while striking up a friendship with pregnant lifestyle blogger Meghan (Jessica De Gouw) – crept into the hospital where Meghan had given birth to her baby, on a deranged mission to steal the newborn.

And viewers were well and truly on the edges of their seats as Agatha bundled the baby into a bag and made a speedy getaway.

But some of those watching raised questions about what happened in the scene, as they asked whether or not certain points were realistic.

Some on Twitter took issue with Agatha’s disguises, which they thought were “obvious” and made her look “no different”.

Wouldn’t they have more security?

Others wondered how Agatha was so easily able to get into the hospital’s neonatal ward. In real life, they typically have tight security.

For others, it simply wasn’t realistic that the baby didn’t cry after Agatha put them in a bag. Some couldn’t get past the fact that the parents and hospital staff left the little one alone.

What did viewers say about episode three?

One viewer wrote on Twitter, of Agatha’s nurse disguise, “She looks no different” alongside crying laughing emojis.

Another said: “Bit of an obvious disguise #TheSecretsSheKeeps.”

A third tweeted: “I know it’s a drama but I can hear all the medical staff, mums and anyone who’s ever been on a neonatal ward screaming at the telly that it just ain’t that easy to get in #TheSecretsSheKeeps.”

Bit of an obvious disguise #TheSecretsSheKeeps

I know it's a drama but I can hear all the medical staff, mums and anyone who's ever been on a neonatal ward screaming at the telly that it just ain't that easy to get in #TheSecretsSheKeeps

Read more: Is The Secrets She Keeps a true story? Disturbing kidnapping that shocked Britain revealed

Someone else asked: “Wouldn’t they have more security on a baby ward? #TheSecretsSheKeeps.”

A fifth tweeted: “#TheSecretsSheKeeps A newborn baby stuffed in a bag and it doesn’t cry?”

“Who would leave their baby alone,” asked another, alongside two sceptical face emojis.

Others weren’t mindful of any of that, instead calling it tough and “distressing” to watch.

Wouldn't they have more security on a baby ward? #TheSecretsSheKeeps

#TheSecretsSheKeeps A new born baby stuffed in a bag and it doesn't cry??

This just got distressing #TheSecretsSheKeeps

– The Secrets She Keeps continues tonight (Tuesday, July 14) on BBC One at 9pm, but is available to watch in full on iPlayer

What did you think of episode three? Leave us a comment on our Facebook page @EntertainmentDailyFix and let us know.

BBC BBC Drama BBC One Drama The Secrets She Keeps