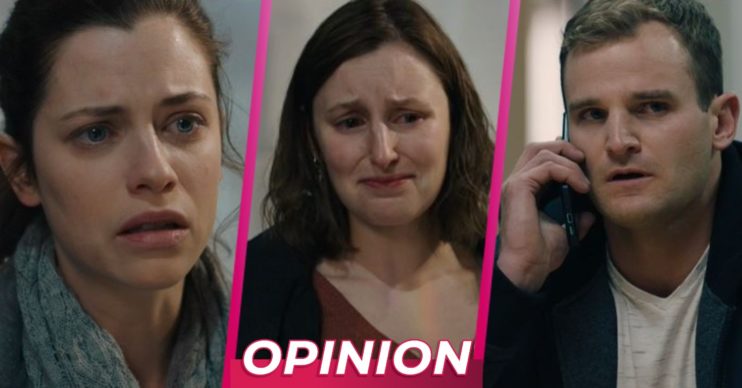 The Secrets She Keeps: How did Aggie survive and five other questions

The Secrets She Keeps ended last night (Tuesday, July 21) on BBC One after gripping viewers for three weeks, mostly thanks to there being no competition from other decent dramas. Starring Downton Abbey’s Laura Carmichael as baby-snatcher Aggie, The Secrets She Keeps certainly went all out in trying to have viewers on the edges of […]

The Secrets She Keeps ended last night (Tuesday, July 21) on BBC One after gripping viewers for three weeks, mostly thanks to there being no competition from other decent dramas.

Starring Downton Abbey’s Laura Carmichael as baby-snatcher Aggie, The Secrets She Keeps certainly went all out in trying to have viewers on the edges of their seats.

But it was riddled with a slew of ‘Oh come on!’ moments that really killed the tension at key points and made suspension of disbelief basically impossible.

Let’s look back at five of the main WTF moments.

Where was all the CCTV evidence?!

When Aggie popped on a Clark Kent-style disguise and went into hospital on a mission to steal Meghan’s (Jessica De Gouw) baby, it was hard to imagine how she planned to pull the whole thing off without leaving a ton of CCTV evidence for the police.

But pull it off she did, getting the tot (later named Ben by his parents, and Rory by his kidnapper) into a bag and back to her flat.

Why couldn’t the police use the hospital’s cameras to see who took the baby, and how?

How did Meghan not even recognise her own baby?

Despite what dads all over the country might tell you, not every baby looks the same. And you’d think any mother – let alone one who’d just had her newborn stolen – would be able to spot her brood a mile off.

In one episode of The Secrets She Keeps, Aggie is brazen enough to take baby Ben/Rory along to a vigil for him.

Aggie bumps into Meghan before getting away, and the lifestyle blogger gets more than a good look at the baby.

Why wouldn’t see recognise him? You could argue that it’s because she didn’t have him for long before he was taken. But still – she spent long enough staring at his face in the hospital to get a good idea.

Meghan had her baby via a C-section. And yet, in the days immediately after, she seemed to have almost no trouble moving around. At one point she even lay down on a hard bedroom floor and curled up. Near the end, she went running down the street, simply holding a hand over her scar.

As anyone who’s had a C-section will attest, this simply isn’t realistic.

Why was Hayden so flaming oblivious?

Aggie’s lies were absolutely blatant, but Hayden (Michael Sheasby) – the former lover she tricked into thinking had gotten her pregnant – took an awful long time to realise what was happening.

That’s despite the fact the answer was staring him right in the face – screaming at him, you could say.

Aggie was clearly hiding something and acting weird. Hayden already had his suspicions, given the shopworker dropped off the face of the Earth for a few days after supposedly having her baby.

How could the cops be so clueless?

The Secrets She Keeps’ big finale at the maritime museum should have been super tense. Meghan held her son, breastfeeding him, before loose cannon Aggie pointed a gun at them.

Then the armed police showed up. And in one ridiculous moment, they actually pointed their weapons at Meghan as she held Ben/Rory.

You’d think, surely, chiefs would have briefed them with descriptions of Aggie and Meghan? Especially since they look nothing alike. Plus, Meghan’s tear-streaked face was all over the news!

All it took was for Aggie to scream that Meghan was taking her baby for the police to nearly gun down the innocent mother. Seriously?

Why would the police shoot someone who has a gun to their own head?

You’re initially led to believe that Aggie shot herself in the head at the end, but you later learn that the police actually shot her. She says, in prison: “I’ve been robbed of everything I ever wanted, even my choice to die.”

Is it really plausible that the police would shoot someone who is pointing a gun at her own head? Surely it could have caused her to pull the trigger?

Leave us a comment on our Facebook page @EntertainmentDailyFix and let us know what you thought of The Secrets She Keeps.