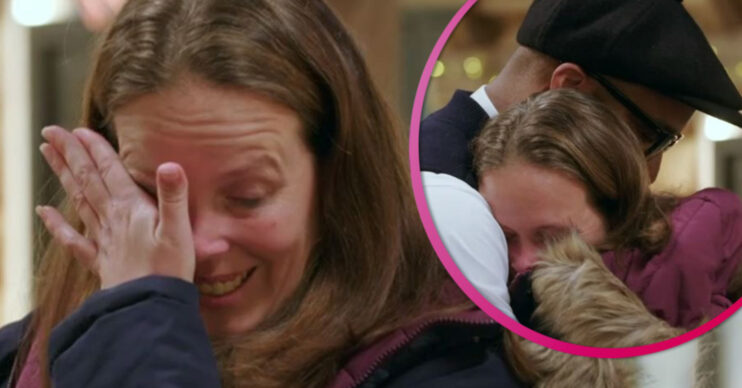 The Repair Shop viewers were left in tears as Helen Bannan explained how she lost her beloved dogs in a fire.

Helen, a former kickboxing champion, appeared on Wednesday night’s edition of the BBC One show and told her story.

Helen had brought in a broken trophy and revealed it was damaged after a fire at her flat.

She told Jay Blades that all her possessions were damaged and she lost her two dogs in the blaze.

What did Helen Bannan say on The Repair Shop?

Jay asked: “Your dogs were inside the flat? Did you lose [them]?” to which Helen said: “Yeah.”

As Helen looked emotional, Jay went and gave her a hug.

In addition, Jay added: “I’m feeling this one because you’ve gained a lot and lost a lot.

“So this trophy definitely means a lot to you.”

Speaking of the trophy, Helen said: “It has memories of all the wonderful friends I made through kickboxing.

“So he has a very happy part of my life. I would just like to see him like I remember him.”

Helen also said when the fire happened, she wasn’t upset about the possessions at first as “all that mattered was the dogs”.

Later in the episode, Helen became tearful as she saw the repaired trophy.

She said: “Thank you, I can’t believe he’s back in one piece.

“It brings back a whole part of my life that without him I don’t have any physical memories, it’s all wrapped up in this trophy.

“It really is good to have him looking as amazing as he did on the first day.”

Meanwhile, viewers were heartbroken after listening to Helen’s story.

What did The Repair Shop viewers say?

One person said on Twitter: “OMGOSH!!! THE POOR LADY loosing those lovely dogs, her flat her belongings. Heartbreaking.” [Sic]

In addition, another wrote: “Heartbreaking story of this lady who lost her dogs in the flat fire.”

After that, a third added: “Ever week I sniff and sob. But this week with the poor lady losing her dogs has got me.”

BBC One The Repair Shop