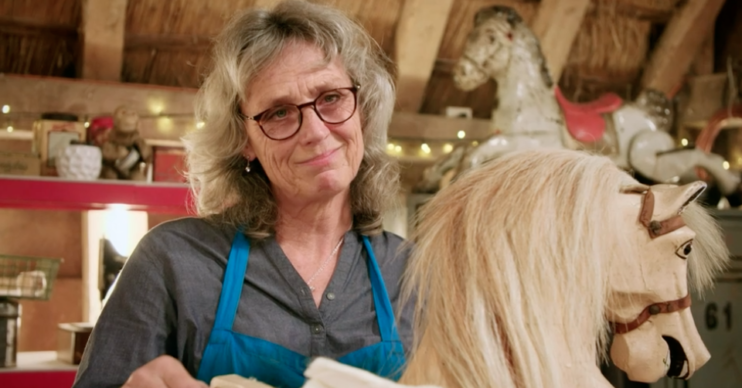 Widow's late husband had put his signature on it

The Repair Shop viewers were left in tears after one of its experts, Suzie Fletcher, restored a beloved childhood rocking horse with a very special meaning.

The BBC show, which is hosted by Jay Blades, sees a group of experts restore various antiques back to their former glory.

During last night’s episode, Julie sought the help of the team to have her old rocking horse restored so she could pass it onto her grandchildren.

Julie revealed how she and her late husband Paul Yates had once attempted to restore the horse themselves, but failed to get anywhere.

Sadly, Paul took ill last year and passed away only a few months later from cancer.

Upon her arrival at the shop, Julie asked expert Will Kirk to look out for Paul’s signature that he painted on the horse all those years ago.

She explained: “He’s looking down and will be happy to know it’s here.

“I hope the grandkids will love it as much as I did when I was little.”

Suzie, an expert in leather and saddle-making, later found Paul’s signature beneath the saddle and broke down in tears.

Revealing the reason behind her tears, she said: “I too lost my husband to cancer, it seems so insignificant that it’s their name that they wrote, [but] it’s so personal, I’m really pleased for Julie.”

The emotional moment left fans reaching for their tissues.

One wrote on Twitter: “It such a joy to feel emotional when you watch tv. I did just that watching #therepairshop I even cried seeing the rocking horse being repaired @bbc.”

Another agreed: “Floods of tears here. Just finished watching. I love #therepairshop so much. The talent of everyone takes my breath away. The rocking horse was so wonderful but so many tears.”

A third added: “#therepairshop not a dry eye in the house this evening folks.”

A fourth said: “Totally losing it watching Susie cry on #therepairshop. This show is so magical.”

Every week I'm just lost for words. The rocking horse. The plates.. Jeez you clever pigeons the lot of you!! #therepairshop

While others praised the show for lifting their spirits during lockdown.

A viewer tweeted: “#therepairshop you bring joy to our telly, seeing restorations of things that seems damaged beyond repair has been so uplifting during lockdown xx.”

A second said: “I love #therepairshop it is the only thing that can relieve all my stresses and make them melt away. It fills me with joy every week. What special people they are.”