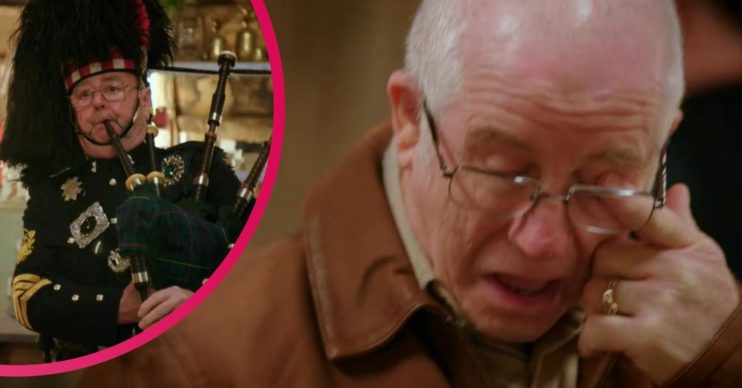 The Repair Shop: WWI bagpipes have BBC viewers in tears

The Repair Shop featured a set of bagpipes played in the First World War last night and viewers thought the episode reached ‘new levels of emotional’.

In Wednesday (October 7) evening’s repeat of the BBC series, Des and Angie Allen from Dorset brought in some bagpipes that were over 100 years old.

What happened with the bagpipes on The Repair Shop?

They had belonged to Des’ grandfather, who died a few years before he was born and had served with the Royal Scots in WWI.

The show’s narrator explained that pipers played a crucial role in shoring up morale during the brutal conflict. But of the 2,500 pipers in the war, nearly half were either killed or wounded.

Des said on the programme: “It’s heartbreaking, to be honest… the journey they’ve had. My father inherited them and he would not take them out the box. I’ve seen the pipes once, when I was about 13, 14.”

Angie explained that she gifted the pipes to Des on his 60th birthday, after convincing his cousin – who had inherited them – to part with the instrument.

At that, Des got emotional and The Repair Shop’s Jay Blades assured him they would do a good job.

Bagpipes on The Repair Shop got me. A new level of emosh that one!

Later in the programme, when Des and Angie returned, they were amazed at the restored bagpipes.

And what’s more, a professional piper came in and used them to play a solemn tune.

Des said afterwards: “I can’t express how happy I am, just so, so happy.”

How did The Repair Shop viewers react?

On Twitter, some viewers watching the documentary were just as emotional.

Another wrote, alongside a string of crying emojis: “The bagpipes, this week’s tear fest.”

A third put: “Bagpipes on #therepairshop got me. A new level of emosh that one!”

Bagpipes on #therepairshop got me. A new level of emosh that one!

Someone else tweeted: “Watching #TheRepairShop and the #bagpipes piece. I think I have something in my eye…”

Watching #TheRepairShop and the #bagpipes piece.
I think I have something in my eye…

What did you think of The Repair Shop? Leave us a comment on our Facebook page @EntertainmentDailyFix and let us know.