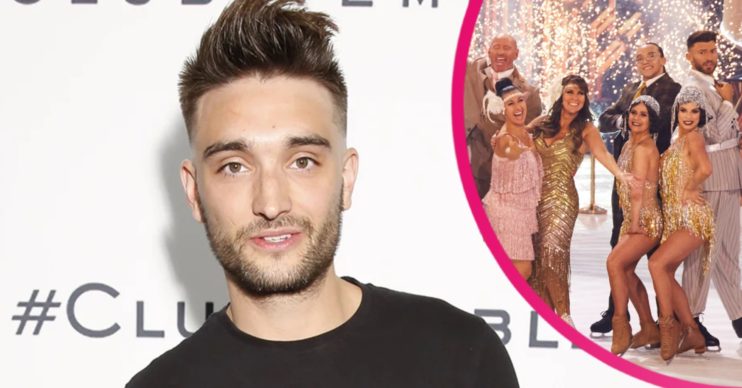 The Real Full Monty On Ice: Tom Parker admits it was ‘tough to watch’ as he battles brain tumour

Tom Parker has revealed watching The Real Full Monty On Ice was “tough” amid his terminal cancer battle.

The Wanted singer, 32, who took part in the ITV show two years ago, was diagnosed with an inoperable brain tumour in September.

Taking to Instagram last night (December 15), Tom explained how watching the series gave him a different outlook as he “fights for his own life”.

What did Tom Parker say?

This year’s series, which is hosted by Ashley Banjo, sees the new line-up of stars perform their routines on ice.

“Little did I know, two years later, I’d be sat here fighting for my own life for my family. Life throws unexpected curve balls at you sometimes.

“It’s how we rise up and face them that’s important. Fate whispers to the warrior. ‘You cannot withstand the storm’ and the warrior whispers back ‘I am the storm’.”

Ashley Banjo added: “Sending you all the love and prayers in the world my friend.”

It’s been a tough few months for Tom and his wife Kelsey, as the star undergoes radiotherapy and chemotherapy treatment.

Despite their struggles, the pair welcomed a beautiful baby son in October.

Speaking to OK!, Tom revealed that he cried his eyes out the first time he held his new son, who the couple have named Bodhi.

Kelsey added: “Tom’s emotional anyway, and I’m the harder one. But I was so overwhelmed when he was born.

What happened on The Real Full Monty On Ice?

During the show, Jake Quickenden left his co-stars in tears as he opened up on his late dad and brother.

The singer lost his dad to bone cancer in 2008, while his younger brother Ollie was just 16 when he was first diagnosed with osteosarcoma.

Speaking about his brother, Jake said: “I took his hand, he opened his eyes and he said, ‘I love you bro’ and I said ‘I love you too, man’. About 20 minutes later he’d gone.”

The emotional episode ended on a high, with the celebs stripping off to Tom Jones’ classic You Can Leave Your Hat On.