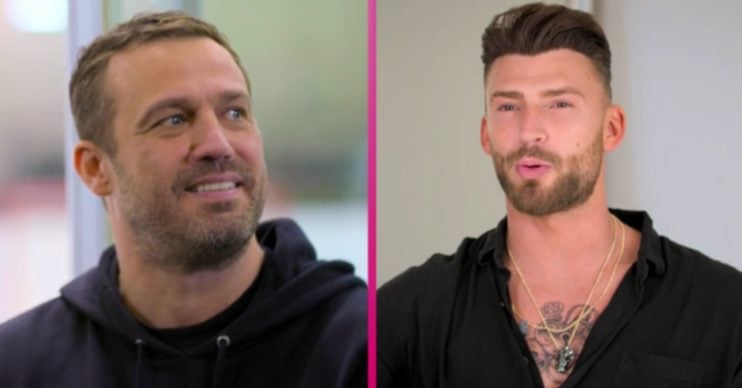 The Real Full Monty On Ice viewers were quick to spot “tension” between Jamie Lomas and Jake Quickenden during last night’s show.

This year’s series, which is hosted by Ashley Banjo, sees the new line-up of stars perform their routines on ice.

And while the show may be for charity, fans couldn’t help but notice apparent growing tension between Jamie and Jake as they met for the first time.

The Real Full Monty On Ice: What happened between Jamie and Jake?

At the beginning of the ITV show, Jamie made it clear he was nervous about “looking stupid” on the ice.

The Hollyoaks star explained: “My worst nightmare on the day is turning up and there are people who have got ice skating experience.

“That would definitely not sit well with me.”

But as Jake walked in with his skates in tow, Jamie appeared to throw a dirty look at the star.

The former X Factor star, 32, previously won Dancing On Ice back in 2018 – and wasn’t afraid to let the others know!

Showing off his skates in his home, he boasted: “These are the skates I won Dancing On Ice on.

“Probably one of the best moments of my life.”

Fans were quick to pick up on the moment, with one tweeting: “Wanna know what Jamie Lomas’ problem is, dirty looks to Jake are unnecessary #TheRealFullMontyOnIce.”

A second said: “#TheRealFullMontyOnIce Did I imagine Jamie Lomas rolling his eyes when Jake Quickenden walked in?”

A third added: “If looks could kill when Jamie saw Jake #TheRealFullMontyOnIce.”

Alongside a series of laughter emojis, a fourth wrote: “Jamie’s face when Jake walked into the ice rink.”

#TheRealFullMontyOnIce Did I imagine Jamie Lomas rolling his eyes when Jake Quickenden walked in?

Meanwhile, fans are convinced Jamie has left the show after the star appeared to be missing from the opening number in Blackpool.

Coleen Nolan, Chris Hughes and Perri Kiely are among the stars joining the pair to strip off for cancer.

Jake opens up on his family heartache

During the emotional first episode, Jake revealed that he was taking part in the ITV series in honour of his late dad and brother.

Opening up last night, he said: “I lost my dad and then my little brother, they maybe didn’t check soon enough.”

He added: “Cancer’s been devastating for me and my family, it’s ripped my whole family apart.

“It’s taken my favourite people away from me. When I was 15 my dad got told that he had cancer in the bone marrow, they told him straight away that he was terminal.

Jamie, 45, is taking part in the show in support of his dad, who is battling prostate cancer.