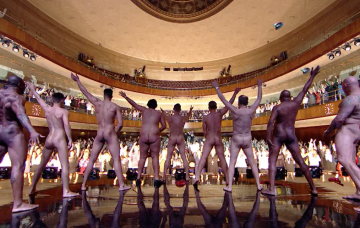 Wonderful awareness-raising and heart-tugging stories but why do it live?

Introducing three of the most life-affirming minutes I’ve ever had the pleasure of seeing on TV, Alexander Armstrong last year mimicked the famous line from the famous film: “For one night only, we’re going The Full Monty.”

So, inevitably, ITV decided to renege on that promise and do it all again, only this time meddle needlessly with the format and fix what wasn’t broken.

The result was last night’s The Real Full Monty Live, a right old mixed bag from Sheffield, the home of the 1997 big screen original.

We had a great cause and heart-tugging stories from the celebrity line-up stripping naked in front of 2,000 people, and millions of TV viewers, about their personal, tragic and sometimes hitherto untold encounters with cancer.

“The reason for me being here is literally life or death,” he said.

The final big performance to Tom Jones’ You Can Keep Your Hat On was again awe-inspiring, jaw-dropping, funny, brilliantly choreographed by Diversity’s Ashley Banjo and an absolute joy to behold.

But the multiple live segments peppering the 83 minutes preceding it betrayed last year’s inaugural show, which was this time reduced to a Comic Relief-lite meets Summertime Special.

Links were clunky, banter stilted and Ashley’s apparent last-minute inclusion in the routine, which in the 2017 version was genuine, was clearly pre-rehearsed, a fact given away by his well-executed dance solo, bang on the rhythm, in the middle of it.

Dr Chris Steele checked Ashley’s balls on stage behind a gold screen, something the medic has done for celebrities many times before live on This Morning.

And, in the most unwelcome new development of all, willy-size references were everywhere.

It was like being in the school playground. Jeff, according to Ashley following intel from the Loose Women, was “gonna need a bigger hat”, creating a mental image resembling the result of a malfunctioning packaging machine in an industrial sausage factory.

Alexander opened the show by revealing a miniature sombrero to cover his modesty.

And, introducing 2017 Real Full Monty alumnus Dom Littlewood, he declared: “Littlewood by name, but not by nature, as I recall.”

Why ITV couldn’t see how inevitable all this flimsy padding was when it scheduled in 90 minutes for a three-minute skit is something we’ll never truly know.

In the words of Ashley Banjo following the group’s abysmal dress rehearsal:  “It’s a mess. Just a shambles.”

You said it, Ash.