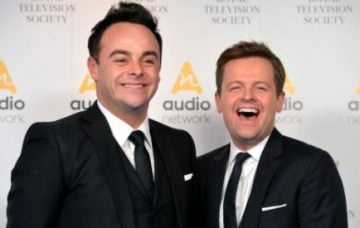 The Queen and Sir David Attenborough hailed by viewers as “the new Ant and Dec”!

Move aside, Anthony McPartlin and Declan Donnelly. There’s a new TV duo in town… none other than Her Majesty the Queen and Sir David Attenborough!

Viewers are hailing the unlikely pair as “the new Ant and Dec” and even called for them to host the next series of Saturday Night Takeaway, despite both being 91 years old.

They appeared together on ITV documentary The Queen’s Green Planet last night, and their on-screen chemistry was an instant hit with viewers.

Her aim is to establish protected forest lands in 53 countries throughout the Commonwealth, and she now has the backing of TV’s most famous natural history presenter.

Viewers flooded Twitter with praise for the duo’s relaxed rapport as they chatted about everything from climate change and the future of planet Earth to conkers during their walk around the royal grounds.

See ya later Ant and Dec, there’s a new iconic duo in town. Attenborough and the Queen. #TheQueensGreenPlanet

The Queen and David Attenborough the new Ant and Dec #TheQueensGreenPlanet

Anyone else watch #TheQueensGreenPlanet David Attenborough and the Queen are the new Ant and Dec. pic.twitter.com/0TrIIG6Qmp

Sir David said on last night’s programme: “Trees have been a part of the Queen’s life, all of her life. Now, she wants to make sure that they’re a part of ours.”

Sharing one of several jokes throughout the hour, the Queen told him: “I’ve been quite difficult to give presents to, so they’ve said, ‘Oh, let’s give her a plant’.”

The documentary also featured Princes William and Harry and Hollywood star Angelina Jolie who are prominent supporters of the Commonwealth Canopy project.

Do you think the pair would make a great replacement for Ant and Dec? Leave us a comment on our Facebook page @EntertainmentDailyFix and let us know what you think!