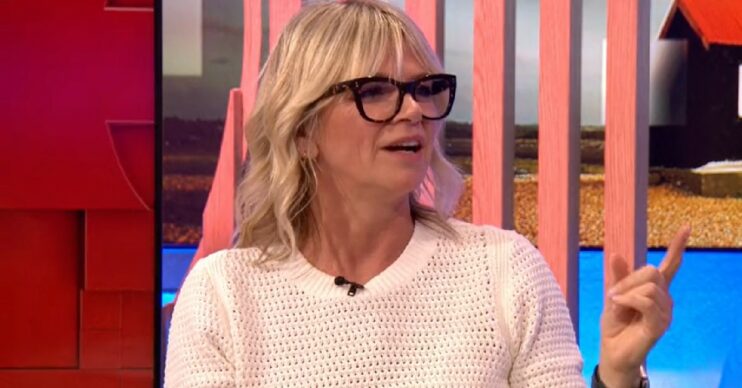 The One Show host Zoe Ball divides viewers with appearance

Zoe Ball hosted The One Show last night but left many viewers divided over her appearance.

The radio presenter, 51, joined forces with Gethin Jones to host the BBC One programme on Friday.

But Zoe‘s rather big glasses caught the attention of viewers watching.

The One Show last night

Zoe wore a white jumper and khaki trousers with trainers to host the programme.

But it was her large, square glasses which viewers were focusing more on.

Some loved the specs while others weren’t keen at all.

One person said on Twitter as they watched the show: “Dreadful specs Zoe.”

Another wrote: “#TheOneShow @ZoeTheBall, sorry but those glasses do not suit you at all.”

However, another tweeted: “I love @ZoeTheBall’s #glasses hosting #theoneshow, where does she get it from?”

Another added: “You have a small face Zoe. Those mahoosive specs don’t suit your face.”

One fan just gushed over Zoe being on the show as they wrote: “Love seeing @ZoeTheBall on telly tonight!”

The One Show presenters

During last night’s episode of The One Show, Zoe and Gethin opened up about working together.

Gethin said he’s been waiting 10 years to work with Zoe, saying: “I’ve been trying to work with you for about ten years.”

So for one night only, the first and last time we will ever be teamed up.

Zoe added: “We worked on the same show but they would never let us present at the same time.

“So for one night only, the first and last time we will ever be teamed up.”

Elsewhere, earlier this week, viewers of The One Show were busy tweeting about a guest.

Susan Calman appeared on the programme to promote her new show, Cruising with Susan Calman.

But it was the way she was sat on the sofa which sparked a reaction from viewers.

As she spoke to hosts Alex Jones and Harry Judd, Susan had one leg tucked up under the other.

One viewer tweeted: “Feet on the furniture!!”

Another said: “Could you give Susan a small stool. It’s hard when your feet don’t reach the ground.”

A third added: “Can you get Susan a stool? Her feet are dangling and she doesn’t look totally comfortable.”

The One Show airs on BBC One, weekdays, at 7pm.

Did you like Zoe Ball’s glasses last night? Head to our Facebook page @EntertainmentDailyFix and tell us.

The One Show Zoe Ball