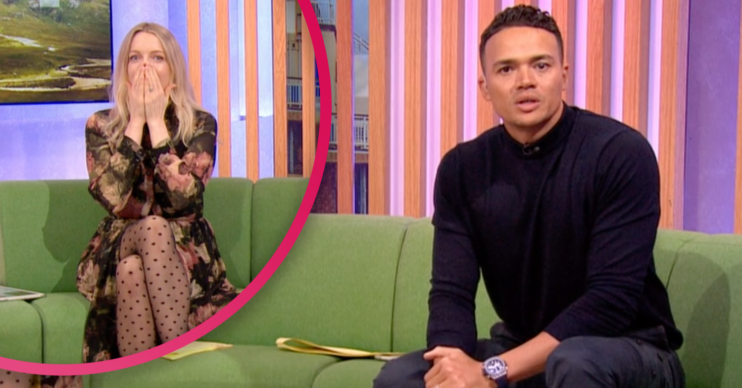 The One Show viewers watched in disbelief last night (November 16) as guests discussed drug use and a “giant erection”.

Sir Rod Stewart and actress Rosamund Pike appeared on The One Show alongside hosts Jermaine Jenas and Lauren Laverne.

And it’s fair to say the hosts got more than they bargained for after their guests appeared to forget they were on a pre-watershed family show.

What happened on The One Show last night?

Rosamund detailed a family holiday with her young sons, where they came across a stag party carrying a beer keg.

She added: “But also trailing a large inflatable man with a huge erection.”

As the hosts giggled, she explained: “Which my boy said: ‘What’s wrong with him, Mummy?’ I said: ‘He’s just excited.'”

Read more: Sam Quek trolled over her weight as she hosts The One Show

Next up was rocker Rod, who Jermaine crossed to after Sophie Ellis-Bextor’s segment on her 24-hour dance challenge for Children In Need.

Jermaine asked: “Rod, what is the longest you reckon you’ve been out on the dance floor?”

The singer declared: “Erm, well it depends what substances I took before.”

At that, the studio fell silent, with Jermaine looking visibly shocked.

It’s fair to say that the chat was the last thing they expected when they tuned into the BBC teatime show.

“Rosamund Pike talking about erections was the last thing I expected on #TheOneShow. Same for the producers I’d say…,” said one.

Read more: Alex Jones suffers awkward mishap as she fronts The One Show

“Wow. This is a real car crash. Erections AND cocaine,” declared another.

A third said: “Rod Stewart on #TheOneShow ‘depends what substances I took beforehand’…. Cue the most uncomfortable silence ever.”

Erections and drugs are the two main topics on the squeaky clean #TheOneShow tonight 🤣 pic.twitter.com/z8t3lBRXCi

Another added: “What has happened to the #theoneshow I’m wondering what will come next?! Production team must be having kittens!”

“Christ, Rod’s talking drugs now after the erection chat. BBC One will be in meltdown,” declared another.

“Quite a wild The One Show tonight what with the mentioning of erections and substance use. #TheOneShow,” another commented.

“Rod Stewart on #TheOneShow is just like Billy Mack from Love Actually. Talking about ‘substances’ and ‘blondes’ on a family show. No filter,” said another.

‘The best One Show in ages’

However, not all viewers were outraged, some found the show pretty funny.

“Love the panic on Jermaine Jenas’ face as soon as a guest goes slightly off piste – case in point: Rosamund Pike talking about a blow up doll with an erection just now,” giggled one.

“Hilarious #TheOneShow this evening, with guests forgetting they were on a family show being broadcast live before the watershed.

“With lots of kids tuned in to learn about Pudsey and #ChildreninNeed, I wonder how many parents had their 7yr olds ask awkward questions. Loved it!” another added.

“This is the best #TheOneShow I’ve seen in ages. The guests have turned the filters off and it’s brilliant,” another declared.

What did you think of the show last night? Tell us on our Facebook page @EntertainmentDailyFix.