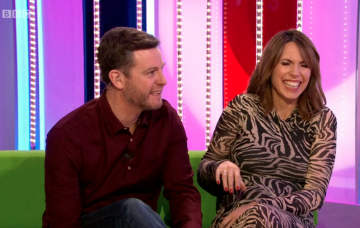 The One Show viewers in hysterics at awkward Matt Baker blunder

Had a bit of an embarrassing moment while chatting with Mary J. Blige

An awkward moment for The One Show presenter Matt Baker had viewers in stitches last night after he mistakenly referred to a guest’s mother as dead.

Matt, 41, and co-host Alex Jones were chatting to singer Mary J. Blige and Loose Women panellist Penny Lancaster about their heroes when he made the cringeworthy gaffe.

It seems he presumed Mary J’s mother had passed away as she spoke about her mother being the person she most looks up to.

But after being shot a puzzled glare from the nine-time Grammy Award winner, Matt quickly realised he had got his wires crossed as Alex giggled at the blunder.

“My mother’s a singer. Well, she didn’t get a chance to live out her dream,” Mary J recalled.

“She received a scholarship for singing when she was in school. And she got pregnant and she couldn’t live out her dream.

“When I was a kid I used to see her around the house cleaning up and singing. I used to look up, literally, and be like, ‘Gosh, I want to be beautiful like her and I want to sound like her’.”

The star continued: “She was very strong. She was a single parent. Against all the odds, she raised her children pretty well.”

Read more: Brian McFadden ‘may have to pull out of DOI due to back injury’

Sensitively, Matt asked: “And, how much of your success did she get to see?”

Breaking out into a smile herself, Mary J emphasised: “Oh yeah, she’s living! My mom is living!”

“She’ll be watching, potentially!” chipped in an amused Alex.

A relieved but slightly flustered Matt swiftly moved to push the conversation on.

“Thank goodness she’s still with us!” he laughed.

Those watching, however, wanted to enjoy the embarrassing moment.

“Matt Baker thinking that Mary J Blige’s mum was dead is my TV highlight of 2019 so far,” tweeted one viewer.

“Mary J. Blige on The One Show thinking who booked her onto this madness haha,” said another.

And a third guffawed, adding two laughing crying emojis to their tweet: “Matt Baker thinking Mary J Blige’s mum was dead on The One Show.”

– The One Show airs weekday evenings on BBC One at 7pm