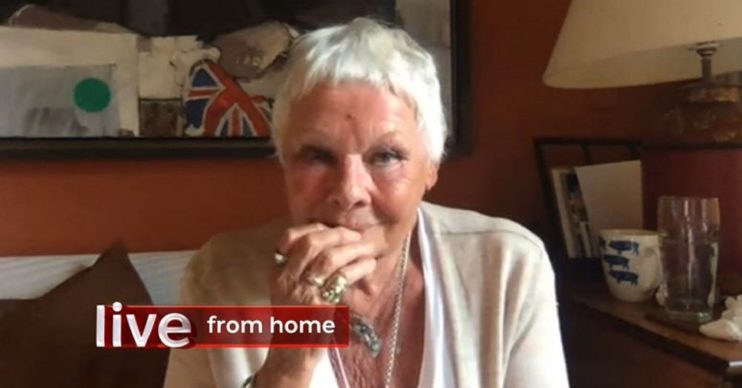 She admitted she's not technically minded

Viewers of The One Show were in stitches last night hearing Dame Judi Dench describe the awkward moment she accidentally flashed her daughter’s pal on Skype while in the bath.

On Tuesday (April 21) evening’s episode, hosts Alex Jones and Patrick Kielty were joined by the legendary actress for chat via video-link.

And Dame Judi didn’t disappoint, as she revealed her recent hilarious Skype-fail.

Read more: The One Show viewers question whether programme is ‘essential’

She said on the programme: “It’s a terrible story. I’m totally un-technical. I don’t know anything about being technical and pressing buttons. This is a miracle to me.

“A couple of days ago, my daughter said to me, ‘We have to Skype this friend for his birthday’.

“So we did, we had a wonderful chat all between us. It was absolutely lovely. He said, ‘I’m just going off for a walk’ and we said, ‘That’s fine’. It finished, and we were very pleased that it happened.

“Then I said, ‘I’m going up for a bath’ and went up for my bath. I had my laptop with me. I brought it down to do something. As I say, I’m totally un-technically minded. I pressed a button and there, suddenly, was this friend.

“I wished him happy birthday in the bath. That’s not attractive! My daughter said, ‘Oh he’ll think it’s a lovely birthday’. Oh I don’t think so, actually!”

Alex Jones, who could hardly contain herself, said: “That’s the best thing I’ve heard in a long time.”

Viewers at home seemed to think so too.

One said on Twitter: “A lovely moment of TV and very funny!”

Another tweeted, with a laughing-crying emoji: “Love it.”

A lovely moment of TV and very funny! 😂

A third wrote: “Judi Dench accidentally flashing her [bleeps] on webcam is an image I’d never think I’d have in my head #oneshow #TheOneShow.”

Someone else said: “Loved that story from Dame Judi. She’s a true national treasure! #TheOneShow #BBCOne.”

“Oh I just love Dame Judi Dench so much!” wrote a fifth.

Oh I just love Dame Judi Dench so much! #TheOneShow

Elsewhere on last night’s The One Show, Alex and Patrick chatted with comedian Dara O’briain. The Irish funnyman talked viewers through some of the amazing sights they can catch in the night sky.

Alex Jones Coronavirus The One Show