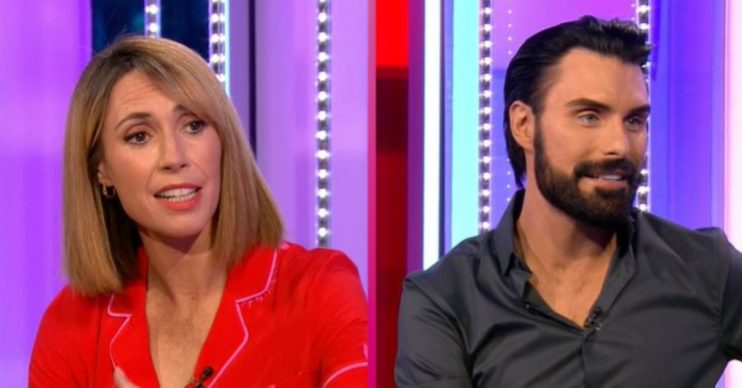 Alex Jones returns to The One Show and viewers are divided

Alex Jones returned to The One Show last night (July 20) after a break away from the programme.

The Welsh favourite, 43, was replaced by guest hosts Amol Rajan and Kym Marsh, and later Alex Scott and Gethin Jones, while she enjoyed a holiday with her husband Charlie Thomson and their sons Teddy and Kit.

Alex Jones returns to The One Show

But Alex was back on the show yesterday (Monday, July 21) evening with Rylan Clark-Neal.

And viewers were divided over her return to the couches, with some claiming they had to switch over and watch something else. Some called the episode and its interviews “painfully awkward”.

One viewer said on Twitter: “#theoneshow Alex is back, time to turn off.”

Another tweeted: “Sorry, turned over.”

A third asked: “#theoneshow is it just me or is this show painfully awkward and simply awful tonight? Sorry for the guests.”

#theoneshow Alex is back , time to turn off

#theoneshow is it just me or is this show painfully awkward and simply awful tonight? Sorry for the guests

However, not everyone felt that way.

Others were made up to have Alex back on their screens and some called her and Rylan the “perfect” combination of presenters.

“Great to see Alex back,” said one viewer.

“Agreed, the show isn’t the same without her,” said another.

Someone else tweeted: “Great to see @Rylan on the show with @MissAlexjones. Perfect!”

Agreed, the show isn't the same without her

Earlier this month, viewers were gutted when they tuned in and found Alex missing from the studio.

Alex has presented the programme alongside a stream of guest hosts since her longtime co-presenter, Matt Baker, stepped down several months ago after almost a decade on the programme.

When they turned The One Show on and saw former Coronation Street actress Kym Marsh presenting with show regular Amol Rajan, many called for Alex’s return.

Are you glad to have Alex back? Leave us a comment on our Facebook page @EntertainmentDailyFix and let us know.