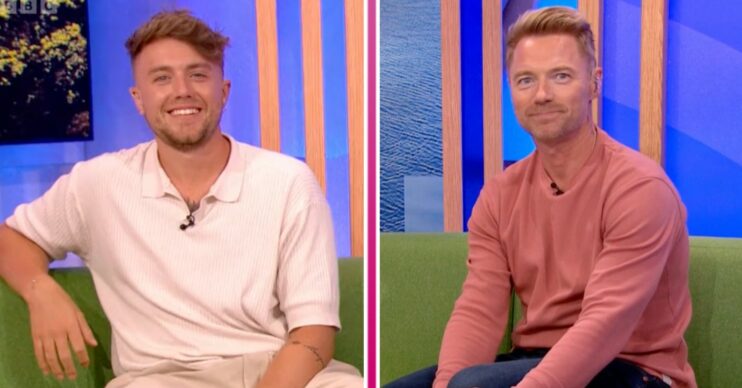 Viewers were big fans of The Ronan and Roman Show

The One Show viewers took to Twitter to issue the BBC with a plea over the show’s presenters last night (Wednesday, July 20).

Roman Kemp and Ronan Keating were hosting the show – and viewers want more of them!

Roman Kemp and Ronan Keating on The One Show

Last night’s edition of The One Show saw a bit of a presenting shake-up.

Alex Scott, who has been presenting the programme for the last couple of days, was replaced on last night’s show.

Read more: Matt Baker on the real reason he left The One Show

In her place was Irish singer Ronan Keating, who sat on the green sofa alongside Roman Kemp.

Together, the duo spoke to Alex Scott, who was pitchside for the England vs Spain game at the Women’s Euros.

Plea over The One Show presenters

At the beginning of the programme, neither Roman nor Ronan could contain their excitement about hosting together.

“Hello and welcome to your Wednesday One Show live on BBC One and iPlayer with Ronan Keating,” Ronan said, pointing at Roman.

“Yes, and with Roman Kemp,” Roman said, pointing at Ronan. “Um, should we just do this Keating and I’m Kemp?”

Please can it be Roman and Ronan all the time?

“Ronan and Roman Show – I’ve been waiting for this one,” Ronan said. “No other man I know does breakfast radio and The One Show in the evening.”

“Yeah. If we do fall asleep, it’s no one else’s fault,” Roman joked.

Viewers were loving the new presenting line-up on the programme, and took to Twitter to beg the BBC for more.

“Please can it be Roman and Ronan all the time?” another begged.

“Roman & Ronan should be #theoneshow presenters permanently,” a third wrote.

One viewer wasn’t impressed though.

“A Ronan and a Roman both hosting #TheOneShow.. who’s idea was that?” they tweeted.