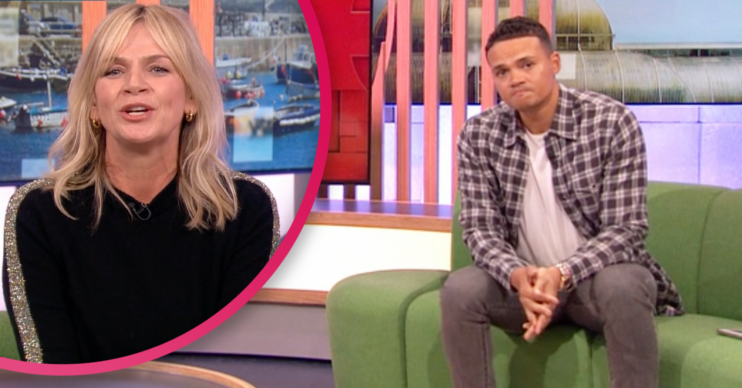 'Get some presenters who can present'

The One Show hosts last night (November 17) came under fire from the self-professed “grammar police”.

Regular host Jermaine Jenas appeared to be the main culprit, and he was joined on the show by former It Takes Two host Zoe Ball.

Together the pair interviewed Hollywood superstar Will Smith.

And some of their terminology was a little suspect, according to viewers.

What did The One Show viewers say about the presenters?

It’s fair to say they were unimpressed with former footballer Jermaine.

In fact, some said the hosts should head back to school, while others called for the BBC to replace the show’s presenters as a result of the boo boo.

It came when Jermaine posed a question to Will prefixed with “was you” instead of were you.

#TheOneShow” can someone please teach your presenter some very basic grammar? ‘Was you…’ Really?” said one.

“Was you….? You mean ‘were you…’ Sorry for being the grammar police but while interviewing Will Smith… how can you be interviewing anyone and not even speak properly?” asked another.

Read more: Alex Jones suffers awkward mishap as she fronts The One Show

“Was you…? I must have missed that lesson in English class,” said a third.

Another picked up on Jermaine’s annoying habit…

“Wish Jermaine would stop saying ‘was you’,” they said.

“With you all the way. Just dreadful,” said another.

“#TheOneShow please get some presenters who can present!” said another.

However, not everyone felt the same, with some backing the hosts and defending them on Twitter.

Responding to a couple of viewers in a bit of a Twitter rant at The One Show stars, one declared: “Both of you stop pearl clutching.”

Read more: Sam Quek trolled over her weight as she hosts The One Show

They added: “Not everyone speaks the same way, it doesn’t matter.”

The moans came after The One Show set Twitter alight the previous night.

Sir Rod Stewart and Rosamund Pike appeared on the show, with the pair turning the air pretty blue.

Rosamund told of a blow-up doll with a “giant erection” while Rod spoke of his previous “substance” use.

Shocked viewers took to social media with their verdict, and predicted the producers would be “having kittens”!

What did you think of the show last night? Tell us on our Facebook page @EntertainmentDailyFix.