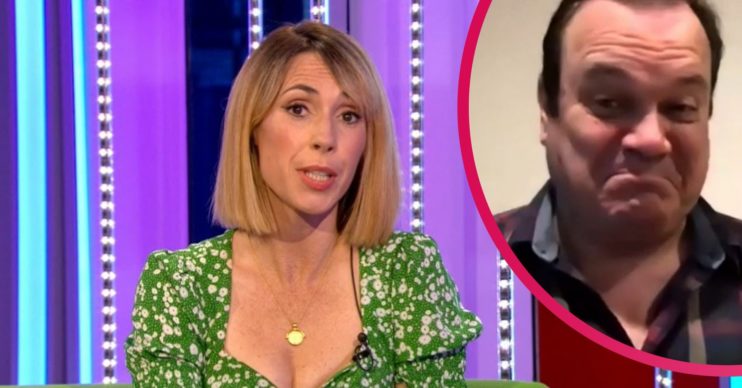 The One Show: Alex Jones gets Shaun Williamson’s name wrong

They knew it was bound to happen

Shaun Williamson saw presenter Alex Jones get his name wrong last night as he appeared on The One Show.

The actor, 54, is best known to many for his role as Barry Evans on the BBC soap EastEnders.

What happened with Shaun Williamson on The One Show?

And at the end of his interview on The One Show on Tuesday (August 18) evening, host Alex slipped up and accidentally called him by his character’s name.

They were rounding off the chat when Alex – who was joined on the couches by guest-presenter Gethin Jones – mentioned Shaun was speaking to them from a hotel.

“I’m in Chippenham, I’m living the dream!” he said. “I’m doing the audio book of my book that comes out on October 1.”

Alex replied: “Eh nice plug you got in there, Barry.”

Gethin was in stitches as he laughed: “You can’t… it’s hard not to!”

Alex added: “Cheers, Shaun. It was bound to happen, wasn’t it?”

Viewers reacted on Twitter, with some calling the blunder “embarrassing” and “cringeworthy”.

Another tweeted: “Omg. How cringeworthy is #TheOneShow.”

A third, who found it hilarious, said alongside laughing emojis: “@MissAlexjones calling Barry ‘Barry’ when he is actually Shaun #TheOneShow.”

It’s hard not to.

Someone else predicted it would happen, writing, “Waiting for them to call him Barry” and then adding later, in a separate tweet, “Yes!” with a crying laughing emoji.

@MissAlexjones calling Barry, Barry when he is actually Shaun 🤣🤣🤣 #TheOneShow

Omg. How cringeworthy is #TheOneShow

Elsewhere in Shaun’s interview, Alex spoke about stars trying to distance themselves from their soap roles after they leave.

Shaun laughed as he discussed doing the exact opposite when he was hired for the sitcom Extras in 2005, following his EastEnders departure in early 2004.

Will @ShaunWilliamson always be known as ‘Barry’?

Shaun gives his opinion, and explains the very good reason he signed-up to play 'Barry' in the show Extras.#TheOneShow pic.twitter.com/9KE9sKD2fm

“You were happy to be Barry in that?” Alex said.

Shaun explained: “I was, because it was Ricky Gervais and Steve Merchant. After the success of The Office, they were hot.

“When they said, ‘Do you want to be in Extras? But you’ll be known as Barry. You’ll be shining shoes, you’ll be a comically unemployable version of yourself’. I went, ‘Yes okay then!'”

What did you think of Shaun on The One Show? Leave us a comment on our Facebook page @EntertainmentDailyFix and let us know.