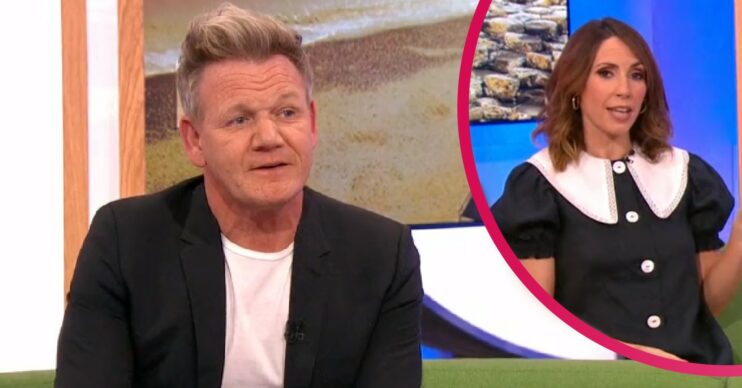 The One Show: Gordon Ramsay swears as BBC forced to apologise

Of course this was going to happen!

Gordon Ramsay appeared on The One Show last night and dropped a swear word live on air.

The TV chef, 55, was on Thursday evening’s show to talk about his new BBC show, Future Food Stars.

But during the chat, Gordon dropped the s-word leaving hosts Rylan Clark and Alex Jones a bit flustered!

Gordon Ramsay on The One Show

Towards the end of the show, Rylan thought he heard Gordon swear and laughed it off.

Alex asked Gordon about a romantic comedy film he once appeared in.

Gordon said: “It was a nightmare. It was just a shocker.”

Rylan cut in: “I wondered what you were gonna say then!”

Gordon then replied: “No I was [bleep], I was sugar, and sweet and just bad.”

Apologies for Gordon’s language slip up at the end.

However, after the programme, its Twitter page issued an apology.

A post read: “We hope you enjoyed tonight’s show as much as we did.

“Apologies for Gordon’s language slip up at the end. Take care, and we’ll catch you tomorrow.”

However, viewers found it hysterical and shared their thoughts on Twitter.

One person said: “Haha, he did well enough to hold it in that long.”

Another wrote: “Of course Gordon couldn’t go half an hour without swearing.”

One added: “How can they expect @GordonRamsay to not swear on live TV.”

Meanwhile, during the show, Gordon opened up about his new BBC show.

He said: “This is about some of the best food and drink entrepreneurs showcasing their brands, going through a series of challenges and getting a huge investment at the end.”

The One Show continues on BBC One, tonight, at 7pm.

What did you think of Gordon’s appearance on The One Show? Head to our Facebook page @EntertainmentDailyFix and let us know.